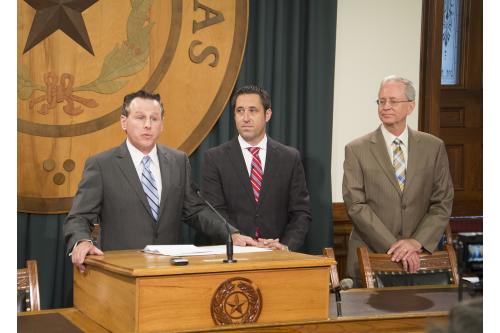 The historic opening of the Texas Bullion Depository has been welcomed by Texans and U.S. citizens, who can now store their precious metals in a highly secure Class 3 Vault with state-administered oversight. This allows investors to rest easy when storing gold and benefit from lower annual fees than the high premiums often seen with home insurers. Learn more about the Texas Bullion Depository from the press release below.

The depository provides holders of gold, silver, platinum, palladium, and rhodium across the country with a secure solution to store their precious metals. Due to the oversight provided by the State of Texas, plus 100% insurance on all assets being stored, depositors will have an extremely high comfort level that the items they are storing will be there when they choose to make a withdrawal.

The Texas Bullion Depository may be the nation’s first state-administered precious metals storage facility open to the public, but the company contracted to operate it has been in the precious metals industry for years. Austin-based Lone Star Tangible Assets is the parent company of precious metals dealer U.S. Gold Bureau and is responsible for facilitating, clearing, delivering and storing high-value assets for hundreds of thousands of clients across the United States and around the globe.

The depository will operate out of Lone Star’s UL-rated Class 3 vault while a much larger facility is being custom-built in the town of Leander, just a few miles north of Austin -- in easy reach of auditors from the State, who will be keeping a watchful eye on the facility at all times.

"We're proud that the nation's first state-administered bullion depository is now a reality — this is a big day for Texans who want to secure their precious metal assets," said Hegar, who became the depository's first customer. "I deposited some gold. The process was easy, and I hope people will go to TexasBullionDepository.gov and set up an account."

There is a simple, all online, process that allows depositors to ship their precious metals through common carriers like FedEx, UPS or USPS. For those with larger amounts, armored truck transport can be arranged.

Precious metals admitted to the depository will undergo three types of non-destructive testing. The checks include a visual test, density test and an exact weight check to ensure all metals entering the facility are 100% pure. Once admitted, depositors will be able to view their metals in their online account.

"Combining the entrepreneurial spirit and technical expertise of the private sector with the trusted oversight of the Comptroller's office is what makes this so special," Hegar added.

For more information, go to TexasBullionDepository.gov.

Posted in: Investing, Texas Bullion Depository
By U.S. Gold Bureau
More from this author
Did you like this post?
0
0
Search The Blog
Categories
Recent Posts