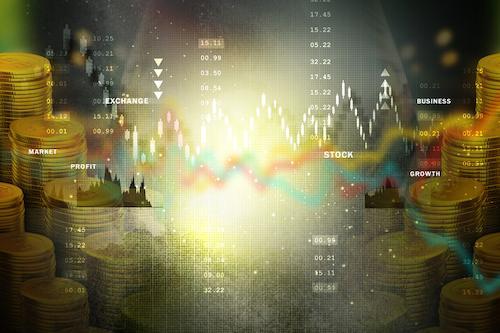 Stocks have risen at a pace seen only three times in 100 years and seem ready for a pullback, based upon a few metrics I will discuss today.  During the same period of time, gold has built a base of support, has likely already visited the low for 2021, and is moving upward.  For those looking for insights about where to allocate capital in the near term, this information should prove valuable.  There are currently imbalances in the economy that will amplify future moves, albeit in different directions, depending on the asset class.  We will take a look at indicators related to equity flows, margin debt levels, and the corporate earnings yield of stocks in the S&P 500 index.  Then we will review and highlight the case for gold and precious metals.

One of the reasons the stock market has been on a tear over the last year is related to something called “equity flows.”  In a nutshell, equity flow is the rate at which assets are drawn into global equity markets, or global stocks.  In the last five months, more funds ($569 billion) have been invested in stocks than in the previous 12 years ($452 billion).  It would be difficult for any asset class not to rise to historic levels with this rate of inflow.  Undoubtedly, a significant portion of recent inflows is related to various stimulus programs implemented by governments and central banks around the world.  But what happens when the stimulus payments dry up and equity flows return back to normal levels, or reverse?  We are preparing to find out.  We are truly in uncharted territory with this metric, but logic indicates a reversal is likely.

There is another source of the record inflows into global equities that have pushed stocks into record territory, which will also drive them lower in the days ahead.  Much of the recent “growth” in the stock market is based on borrowed money, in the form of margin debt.  Margin debt is when part of the stock purchased is used as collateral for a loan to purchase more stock.  As long as stock is rising or moving sideways, there are usually no hiccups involved with margin loans.  But like loans against other collateral, there is a maximum amount that can be borrowed against any stock.  If the stock drops in price, there can be a “margin call” issued that requires the investor to deposit cash sufficient to raise the collateral to minimum levels against the loan.  Often, stock must be sold to raise that cash, which puts further down-pressure on falling markets.

As it currently stands, margin debt levels are in record territory.  Never before have we seen margin debt increase to these levels, in such a short amount of time.  Similar peaks of margin debt, albeit much lower, preceded the stock market declines during the dotcom bubble burst of the early 2000s and the Great Recession of 2007-2009.  If history is any guide, the next pullback could be even more significant than either of these, relatively speaking.  When margin borrowing plays a major role in a rally, margin calls can present an outsized risk to the decline.  Think of margin debt as an amplifier for whatever else happens in the marketplace, both while rising and while falling.  While margin debt itself is not often the trigger that causes a decline, it serves as a multiplier that sometimes turns a correction into a crash.

With interest rates near record lows, some have turned to equity yields as a replacement for bonds or other fixed-income investments.  But with equities near record highs, the yields have dropped precipitously.  Yields have not been this low for equities since the Great Recession.  For yields to increase to average levels, either company earnings have to increase, or stock prices have to fall.  With commodity price inflation rising faster than wages, it will be difficult for corporations to pass higher costs on to consumers.  A more likely outcome may involve lower stock prices.  Previous instances of reaching these levels (two other times in the last 150 years) have prefaced a pullback in market levels.

No one knows how long the current conditions will persist, but the upward trend exhibited by stocks has grown very long in the tooth.  Based on trend age, a pullback would be expected even without the massive equity inflows, record margin debt, or low equity yields.  But these three factors occurring simultaneously should serve as a warning of unsafe conditions ahead.  Thankfully for us, there are assets (precious metals) that appear to be receiving a tailwind of momentum in an upward direction, with lower risks.

Gold has reached a seven-month high and continues to exhibit strength.  There is worldwide demand for physical gold, from both individuals and governments alike.  China has recently begun to increase imports of gold from abroad, which is helping to lift gold prices worldwide. Since the end of March, both gold and silver have outperformed the dollar and Bitcoin.  Both dollars and Bitcoin have declined, while gold and silver have increased in value.  Demand for physical metal is prompting warnings from national mints and the London Bullion Market Association (LBMA) noting that supplies of silver are getting tight.  The LBMA has recently issued a special report on silver, which highlights the organization’s concerns and discusses the increased investment demand for the metal.  While silver investment products place an indirect demand on physical silver, there is an increasing direct worldwide demand for physical silver, as well.

With inflationary pressures building, investors will soon realize that some of what is labeled “growth” is more likely inflation, or dollar devaluation.  With the dollar growing weaker on the worldwide stage, it would behoove us to follow the example of others purchasing gold to protect ourselves.  While the stock market is flashing warning signs that most of us have never seen in our lifetimes, there is little that the gold market has not endured in the last 5,000 years, and yet, it is still alive and well.  Granted, most of us will only be here for 100 years or less, but we may as well enjoy our time here as much as possible.  If avoiding significant losses and preserving purchasing power sound appealing, it might be a good time to rotate a portion of your assets out of the stock market and into precious metals.