Are You Recession-Proof? Protect Your Wealth with Gold.

Are You Recession-Proof? Protect Your Wealth with Gold.

If you share the same sentiments as many economic watchdogs that are seeing signs of an upcoming recession, what can you do to protect your investments? Instead of worrying about the next recession, why not view it as an opportunity?

Though there are many, including Donald Trump, touting a strong economy and low unemployment rates, many experts tend to view market optimism as a precursor to an imminent market crash or recession. While major indexes are trading at market records and signs are easing on the trade front, the great irony here is that such good sentiment does indeed cause many investors to feel a bit weary about the economic future. Some analysts are viewing investor sentiment as a potential risk; high confidence is sometimes seen as a contrary indicator, suggesting that many investors and consumers are complacent about the risks of a potential market downturn leaving many vulnerable.

What do the experts say?

Torsten Sløk, chief international economist at Deutsche Bank Securities, said confidence was “at levels normally indicating a recession is imminent.” In fact, a recent reading of consumer confidence came in at an 18 year high in August, reaching its highest level since the dot-com high of October 2000. 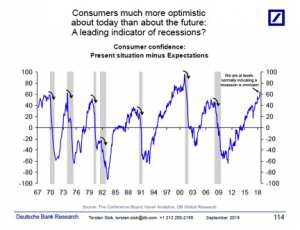 Many tout gold and other precious metals as “recession proof” that tend to make a positive return during times of historic economic crisis. Gold’s intrinsic value tends to usually act independently and based on its past performances, often exceeds the stock market even during deeper recessions. You do not have to look very far to find evidence of gold’s resiliency during hard times.

In 2007, as the S&P 500 plummeted nearly 20 percent, SPDR Gold Trust (GLD) resulted in a positive 80 percent return. In the chart below, gold can be seen resulting positively during 5 out of the last 7 major recessions in recent history from 1965 to 2015. Even during the two negative sessions, gold still outperformed the stock market. 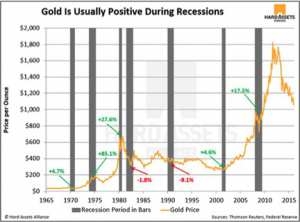 What are the Red Flags of a Recession?

There are a couple of signs that have economists concerned that a recession is looming near. “One of the biggest concerns is the housing market.,” said Lindsey Piegza, Chief Economist for Stifel Financial.

“It’s throwing up a very large red flag and suggest maybe this 4 percent growth we saw in the second quarter is not sustainable.”

In four of the last five months, home sales have declined while housing prices continue to be on the rise, all while paychecks for the average American consumer.

There are a couple of signs that have economists concerned that a recession is looming near. “One of the biggest concerns is the housing market.,” said Lindsey Piegza, Chief Economist for Stifel Financial.

“It’s throwing up a very large red flag and suggest maybe this 4 percent growth we saw in the second quarter is not sustainable.”

In four of the last five months, home sales have declined while housing prices continue to be on the rise, all while paychecks for the average American consumer remains stagnant. The bottom line is that many can’t afford to buy home and those that do end up taking on a large amount of debt in order to do so.

Piegza says this echoes activity prior to 2008, our last great recession, and ten years worth of low interest rates has helped people to forget the dangers of borrowing too much. Now, interest rates are taking off after their hiatus at extreme consumer friendly low rates.

Heightened interest rates are another sign that Piegza points to as a harbinger of possible economic turmoil. The Federal Reserve, after raising interest rates at a meeting with central bankers, is expected to raise rates at least two more times by the end of the calendar year.

With two more interest rate hikes planned, the Fed could boost short-term rates higher than long-term ones, inverting the so-called yield curve. An inverted yield curve has preceded every recession in modern history.

And while Fed Chairman Jerome Powell has reiterated that he is not concerned about any kind of yield curve, Piegza and other economists strongly disagree.

"We could easily be there by the end of the year."

Piegza may be correct in her end of the year prediction. The Fed is expected to raise interest rates again in September and possibly once more in December. The government is also expected to keep increasing its borrowing in order to pay for tax cuts and federal stimulus programs, which, in turn, could also lead to even higher interest rates.

The Treasury had been increasing shorter-term debt, in 2-year and 3-year notes, at a faster pace than the longer end 10 years. At the beginning of this month, it increased 5-year issuance by $1 billion a month, instead of $1 billion for the quarter as expected.

This recent action supports Piegza’s concerns that the Fed’s recent behavior could lead to inverting the yield curve thus preceding another potential recession.

As many continue to look out for activity that could lead toward higher interest rates, higher average consumer debt and of course the housing market, it seems there is no point in fearing an imminent recession, but rather embrace it as an opportunity to diversify.

Though the 2008 Great Recession doesn’t feel far removed, it seems that those times have been set by the wayside by consumers due to ten-year low-interest rates. Borrowing is up, housing prices are up, and now, interest rates are no longer darling deals for consumers. As interest rates continue to rise throughout the year, the market may begin to resemble the economic downs of 2008. Perhaps now is a perfect time, as gold remains around the $1,200 psychological point, to buy gold commodities as potential “recession-proof” insurance.

Posted in: Investing, Gold
By United States Gold Bureau
More from this author
Did you like this post?
0
0
Search The Blog
Categories
Recent Posts