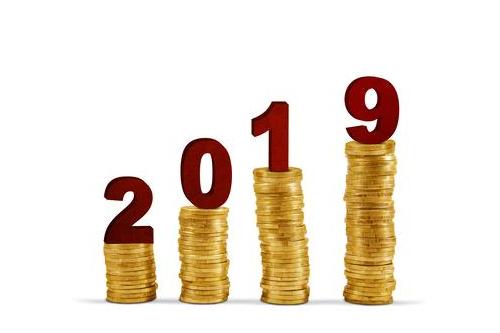 Knowing future precious metals prices can be difficult to project in stable times. Perhaps more so now, because the old world order is changing. But we believe gold and silver will do well in 2019. Oil has had a rapid and significant drop, that thus far has not been halted by production cuts. An increasing part of the oil trade is now done outside the realm of the Dollar. We could see a situation in 2019 where the price of oil is rising in Shanghai, while the WTI price is lower, due to decreased worldwide demand for the contract (not the oil) priced in Dollars. Currently Canadian crude is even lower, a strange phenomenon causing them to lose money on every barrel. We believe low oil will be short-lived. Many interesting developments are currently in play, that the world has never seen. Another major driver for market disruption and higher precious metals prices in 2019 has to do with disruption in the debt markets. Increasingly, debt has been used to help keep equity prices high, while often used to force gold and silver prices lower. We believe the wheels are already coming off of the debt markets, with 2019 seeing gold and silver as primary beneficiaries.


Iconic American companies such as General Electric and General Motors, have long loaded up on cheap debt. These borrowed funds were often used to buy back shares, thereby increasing the stock price. One reason this will not work going forward, is interest rates have risen. It has become more expensive to service and roll over this debt. Unfortunately, by sacrificing future growth in company revenues for a temporary boost in their stock price, there are no additional revenues available to pay the debt. Often, revenue has turned negative, putting further pressure on, and making it harder to refinance debt. If this is the current trajectory for GE, and GM is closing plants and laying off thousands of employees, what about companies less strong to begin with? 16% of American corporations are now considered “zombie corporations”, with slightly less profit than necessary to service low-interest debt. As these loans mature, the present higher rates will push many into bankruptcy, pulling stocks down.


Difficulties for Platinum and Palladium


I believe that the current price of platinum at $805 is a good entry point, but the same forces likely to propel gold and silver higher will not have the same effect on platinum in 2019. Difficulties in the auto sector are largely responsible for platinum’s fall, and I am not confident those issues will be resolved in 2019. The same challenges mentioned above about GM are also affecting other manufacturers as well. Platinum could go lower, to $750, with an upside potential of $870. This could come at the expense of palladium, which has temporarily surpassed platinum due largely to financial speculation. I believe 2019 will likely see platinum overtake palladium in price, but both struggle due to difficulties in the auto sector.


The Floor Price of Gold


While a significant floor has been established for gold around $1,200, it is conceivable that we could see a dip to $1,160 or so during a market disruption or sell-off between now and December 2019. Even though contagion is typically good for gold and silver, major sell pressure on risk assets often means gold must be sold as well, to make good on margin calls for declining paper assets. This is normally a short-term phenomenon, however, with precious metals quickly finding a bottom, while paper assets continue to jettison lower. While Americans are beginning to wake up to the importance of gold and silver as an allocatable asset class, foreign buying alone kicks in around the $1,200 mark for gold, helping to buoy it. While this represents a price approximately 2.8% lower than the current price of $1,234, stocks and bonds have much further to fall before looking like a safe bet in uncertain times.


Another reason to feel good about purchasing gold and silver is that we are only slightly above the current average mining costs for gold, and below the average mining costs for silver, based on data through Q3 2018. While many try to project gold and silver prices based mainly on supply and demand considerations, I believe a more accurate method considers the costs of production as a primary driver. If we use a base of $1,204 for gold and $16.10 for silver, then it would appear to be much more likely that any significant moves will be greater to the upside, than the downside. These numbers represent the average of 10 top silver miners, with SSR Mining ($22.39/Oz) and Fortuna Silver Mines ($10.80/Oz) being the highest and lowest cost among them. We looked at the top 5 gold miners, with Goldcorp ($1281/Oz) and Newmont ($1144/Oz) serving as the high and low, in terms of production costs.

Granted, even though only 30% of mined silver comes from primary silver mines, it is still useful to know what it is costing the top miners today to pull metal out of the ground and put in the pipeline. With silver currently at a spot price of $14.45, it is currently below primary mining costs of $16.10. This analysis alone indicates that silver has significant room to spring to the upside, even without further reason. Think of that - an 11.4% increase in the silver price is needed, just for silver miners to break even. As they say, the cure for low prices is often low prices. Mining is a very capital intensive process, that requires money, manpower, and machines. As mines go idle to save cash, the supply of metal diminishes. Then supply/demand considerations begin to have an impact, but along the cost-of-production trend line.


The same market disruptions that could temporarily bring gold to our projected $1,160 low point sometime between now and December 2019, could bring silver temporarily to $13.50. The key word here is “temporarily”, as it would probably recover somewhat before the end of that day. Keep in mind also, that at these levels, demand would be off the charts with premiums marching higher. The net effect would make it difficult to purchase gold or silver at a price lower than it is currently. In other words, if you would be a buyer of gold at $1,160, and a buyer of silver at $13.50, you may as well purchase now. $13.50 silver with a $6 premium would cost more than $14.45 silver with a $3 premium. Ditto for gold.

What about the upside? I believe gold will close 2019 near $1,351 an ounce, and silver near $17.60. While there may be spikes to $1,402, and $18.40 respectively, I believe that is where we will close the year. This represents a one year gain of 9.5% for gold and 21.7% for silver. While this is not the most outlandish forecast you will come across, we believe it to be closer to the truth. With so many variables, it is difficult to anticipate every development. But given the levels of debt and extreme valuations in the bond and stock markets, we believe it will be much safer in 2019 to achieve this level of growth in gold or silver, than with other assets, including real estate. While the risk-averse should perhaps wait to purchase palladium, 2019 should be a good year for gold, silver, and platinum. Tell them Bill sent you.