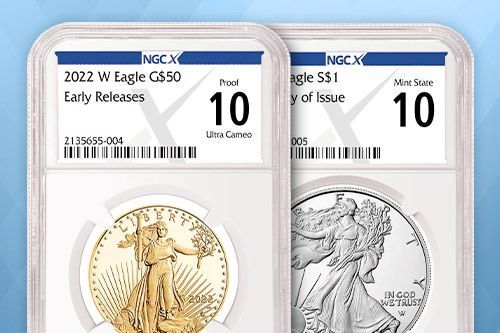 The Numismatic Guarantee Company (NGC) announced it will begin using a 10-point grading scale for coins called NGCX in January 2023. NGCX will use a first-of-its-kind grading scale for coins. Still, it is the standard among other collectibles like trading cards, comic books, and vintage video games. The new Scale will supplement the Sheldon Scale, which grades coins from 1 to 70. The goal is to make coin grading more intuitive and approachable to more people.

The Sheldon Scale is the industry standard and was invented in 1949 by William Herbert Sheldon. The Scale was updated in the 1970s and assigns coins a score of 1, extremely poor quality, to 70, museum quality, flawless at five times magnification. Learn about the Sheldon Scale grading criteria here.

What Coins Will Be Eligible for Grading Using NGCX?

Only modern coins minted after 1982 will be eligible for the new NGCX grading process.

How Will the New Grading Affect PF70 Coins?

NGCX grading will not affect the price of Sheldon Scale-graded coins. A PF70 is a perfect coin and will be equivalent to NGCX 10.

What Does the X Stand For?

The X stands for ten, like the Roman numeral.

Where can I get NGCX coins?

What Is the Difference Between the Two Grading Scales?

There is no difference in quality between a grade on the NGCX 10-point grading scale and a 70-point scale. On the NGCX scale, 10 is the supreme grade, equivalent to a 70 on the traditional Scale. The subsequent grades cascade from 10, a criterion most people understand.

Who Is the NGC

The Numismatic Guarantee Company is “the world’s largest and most trusted third-party grading service for coins, tokens, and medals. Since 1987, NGC has graded more than 55 million coins, each one backed by the industry-leading NGC Guarantee.

How Will the Labels Appear?

Where Can I Learn More?

Why Did the NGC Introduce the NGCX Scale?

The NGC wants to increase the appeal of coin investing/collecting and make it more accessible. Most collectors of other tangible assets like cards and comics are already familiar with the 10-point Scale. The Scale is more intuitive for many people and simplifies transitioning to coins. The new Scale should invite new people into the market, increasing the demand for coins. Increased demand should translate to higher prices. When the new Scale becomes widespread, and a wave of investors enters the market, many existing coin investors will be positioned nicely to recognize gains.

What Are Investors Doing To Get Ready?

There are still many unknowns about the new NGCX grading scale. Despite the unknowns, certified coins will undoubtedly be more accessible for many people to invest confidently. Many investors and collectors now prepare by investing in Pre-33 and modern-era Investment Grade coins through the U.S. Gold Bureau. Savvy investors realize that moving before the masses usually yields the best return on investment.