There has always been a certain mystique surrounding the American Indian warrior, such as the unnamed warrior depicted on the American Gold Buffalo coin. But what connections are there between the Indians honored by the coin, and gold itself? What role did gold play in the commerce and trading systems used by these Ancient American societies, and what other means did they use? How did their methods of trade compare to those in use today, and what can we learn from their experiences, to make our systems better? These are some of the questions we hope to answer in today’s article. We hope you find it as informative and enjoyable to read, as we did to write.

Native Americans had developed their own systems of currency and trade, somewhat similar to our own. In fact, the same systems adopted by some Indian tribes were also used by the early American settlers and colonies. They also made some of the same mistakes with currency that hundreds of cultures made before (and after) them. Some of the mistakes they made, continue to be made in modern American society today. 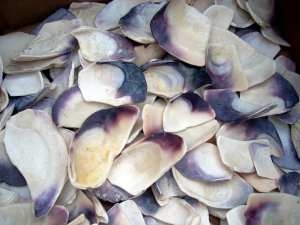 The phrase “five clams” used to be commonly used slang referring to “five dollars”. One of the reasons why, is because some Native American tribes used clam shells for money.  Normally it was pieces of shells strung together, with certain colors being more valuable, such as purple. Purple shells were often valued at 5 times the white shells, and were used in the most important treaties and transactions. To get more “money”, one needed only to trade an item of value for clams, or go to the sea shore and pick up more shells. The most ornate and valuable pieces also had a fair amount of labor included, as the shell pieces were polished and stitched together after small holes were bored into them.

While we might understand that primitive cultures could use something like “shells” as money, it is interesting to note that shells were also used by the early colonists, when coinage was in short supply. As it turns out, Manhattan NY, the heart of the American financial district, was purchased from the Indians with shells. The shells were called “Wampum”, and were also used by one of the first governors of New York (before it was known as New York), Peter Stuyvesant, to pay the construction workers who built the New York citadel. Who could have guessed that what became the financial center of the world was originally purchased with sea shells. 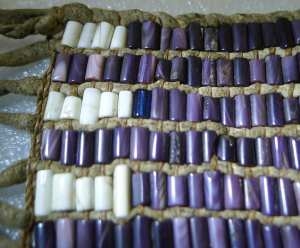 But this is where both Native American society, and early American colonial society learned the fallacy of depending on something other than Gold or Silver as money. Those early settlers, working with a couple of Indian tribes, created “money factories”, where they harvested and crafted Wampum in ever increasing amounts, using metal European hand tools to make the process more efficient. As they did this, the value of the shells became worth less and less, due to inflation (increased money supply). Today, Wampum is only valued as an artifact; it has no monetary significance at all, in any modern culture we know of. Incidentally, this is what has happened to every paper currency in either ancient or modern history. Perhaps someday, someone will be writing about how our society used paper with green ink, in the same way we are discussing how Early and Native Americans used sea shells.

As we have discussed many times previously, money that is not based in precious metals tends to lose it’s purchasing power over time; often completely. Tragically, while many in the Native American population knew where gold was, few valued it for anything. There were some that later found it useful to trade with settlers, but most viewed it as nothing more than a shiny piece of earth. It was native California Indians that helped create the 1848 California Gold Rush, without realizing the impact of what would happen. While often involved in leading prospectors to places with high concentrations of gold, the ending result was horrific for the local Native American population. The Gold Rush brought in thousands of prospectors from the Eastern United States, who brought unfamiliar diseases, and unfriendly attitudes towards the Native Californians. Death from disease and maltreatment led to the loss of approximately 240,000 Native American lives in California, as a result of the gold-related expansion westward.

While they had knowledge of, and access to the gold for hundreds of years, they did not think twice about it. They valued it no more than the settlers valued sea shells, until they discovered it was useful to trade with. The owner of Sutter’s Mill, where the gold was originally found, previously paid his workers with tin coins that could only be spent at his own store. That is how all fiat money ends up sometimes - spendable only in a few locations. Gold and Silver, however, are accepted worldwide. In any language, and nearly every culture, Gold talks, and people listen.

Today, we can see a repeat of some of the mistakes of the past being made by modern Americans. There is an abundance of Gold and Silver coins currently available and being produced by the US Mint, for Americans to use to protect their financial future. But like the Native Americans of old that knew it was there, too many today do not avail themselves of the opportunity. Gold has been moving East, into hands that appreciate it.

In order to prevent repeating the same mistakes that cultures and societies have made over and over again, we have to do something different. We should store at least a healthy portion of our wealth, in the universal currency that has stood the test of time the world over. We have to exchange at least some of our sea shells, or, paper dollars, for that shiny yellow metal, that protects our purchasing power year after year. We have to buy some Gold.