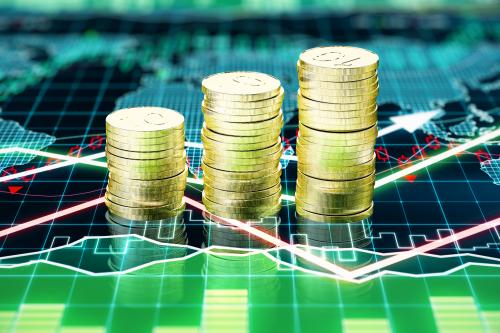 Gold Invest in Gold Stock Market
As of Thursday, the Dow had dropped an astounding 1,300 points over the last two days with many stocks reaching 52-week lows. After a rocky morning of premarket trading, the major exchanges had pared their losses by midday, looking to regain their footing. But by mid-afternoon, sell-offs intensified and all sectors of the S&P were trading lower as the Dow had plummeted 699 points while the CBOE Volatility Index (Wall Street’s “Fear Gauge”) had hit its highest level since February. The Dow has now suffered its worst week since March. The Dow Jones Industrial Average fell 545.91 points, or 2.13 percent, to 25,052.83, the S&P 500 lost 57.31 points, or 2.06 percent, to 2,728.37 and the Nasdaq Composite dropped 92.99 points, or 1.25 percent, to 7,329.06. And while investors were fleeing the stock market for bonds and other safer assets, gold had surged by 3 percent and hit its highest level since early August of this year. During this market turmoil, gold has stayed solid and even gained while still remaining at an affordable buy-in price, for now. “What we are seeing now is changing sands. The ground isn’t stable and people are figuring out where to go next,” said JJ Kinahan, the chief market strategist with TD Ameritrade. Tech stocks are under fire currently because of their high risk while they are the most expensive parts of the market. Investors fear that tech companies may not hold up in a downturn, particularly as interest rates continue to rise. The tech sector had its sharpest plunge in seven years this week. Amidst trade tensions, rising interest rates and investors selling off in search of more stable assets now may be the time to diversify into gold. In fact, about 380 S&P stocks have fallen 10 percent or more from the 52-week highs, as of midday trading, placing a majority within correction territory. Out of this group, 164 have fallen by 20 percent or more. See the chart below for the S&P 500 stocks slump from their 52-week highs.

Investors worried that equity markets would have trouble recovering as rising interest rates coincide with uncertainty about how much earnings growth would be hurt by a US trade war with China. Some are attributing trade concerns to the stock market’s recent struggles. Trump has imposed tariffs on Chinese goods worth $250 billion and has applied tariffs on steel and on foreign aluminum, which raised import and domestic costs. He has threatened tariffs on another $276 billion in Chinese products, which would touch nearly every imported good as well. A collation of US businesses called “Tariffs Hurt the Heartland” is reporting that these trade measures are costing American businesses and consumers $1.4 billion a month. “People fear that it will be harder to snap back if we’re seeing a cyclical top in earnings with those two headwinds, which are not going away,” said Michael O’Rourke, chief market strategist at Jones Trading in Greenwich, Connecticut. And with all this, the US Federal Reserve’s rate hike plans are likely to rise, as planned- there will still be higher rates by the end of the year. President Trump even commented on the Fed calling them “crazy,” “loco,” and “too aggressive” in raising rates. Unfortunately, Trump’s comments and the stock slide probably won’t be enough to prevent the Fed from raising rates again in December. As of now, continued Fed rate hikes with a December increase assigned a 78 percent probability, down only 3 percentage points from before Wednesday’s market turmoil and Trump’s comments. Though the market has recovered slightly as of Friday, most traders don’t think that they are out of the woods just yet, as some are predicting a lot of volatility in the next week or so. The S&P’s eleven major sectors all finished the day in the red with energy as the biggest loser with a 3.1 percent drop while US Treasury yields ended at a one-week low. With gold ending at its highest level in months, and stocks struggling amidst trade concerns and rising interest rates, perhaps now is the time to be pursuing gold. Major sell-offs and market volatility also seem to be a hindrance on this fragile market as well. Very few sectors finished in the positive over the past few days, while gold is surging. The last time stocks closed at 52-week lows, during the selloff between January 26 and Feb 9, the S&P lost as much as 11.8 percent, and it took until August to recover. By these standards, now may be the time to diversify.
Posted in: Investing , Gold
Did you like this post?
0
0
Search The Blog
Categories
Recent Posts