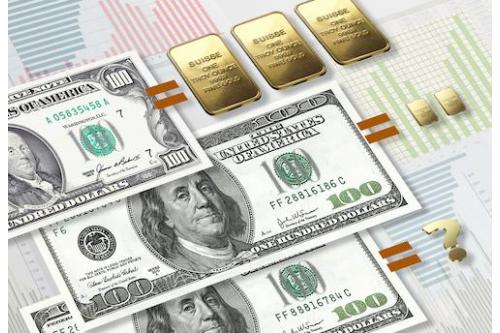 Recently, we have heard about market watchers being concerned about rising interest rates. I believe this concern is somewhat misplaced, with the real threat coming from higher inflation. While bonds have dropped in value as rates have risen, most rates are still negative in real terms here in the United States. This infers that interest rates are lower than the rate of inflation, which means your purchasing power is guaranteed to be lower after holding a bond to maturity and receiving the interest on it than it was when you purchased the bond initially. If cash is not an option, bonds are moving lower, the stock market is concerned, and interest rates are below inflation levels, where else is there to go to safeguard your wealth? Thankfully, we still have physical gold and silver to protect our savings from the ravages of inflation, as they are among the best performing assets during inflation.

With government debt reaching stratospheric levels and poised to go higher, the last thing the government can afford is higher interest rates.  I predict the government will begin using some type of “yield curve control”, or YCC, to keep a lid on how high interest rates can climb.  The government typically does this by purchasing existing Treasury securities in sufficient quantities to cap the interest rate at a certain level.  With the Quantitative Easing (QE) approach, the focus was on the quantity of bonds created.  With YCC, the focus is on the price of the bonds, as determined by the interest rate.  A variation of YCC was used to fund WW2, and the Japanese have used YCC extensively since 2016 to hold their 10-year government bond interest rate near 0%.  YCC also helps keep bond prices higher, by placing an implicit floor under prices at a predetermined level.  Why sell a bond for a lower price to someone else, when the government will pay more?

This policy of limiting interest rates nearly guarantees that we will have higher inflation.  In addition to YCC, currency creation is operating in high gear in Washington today.  The most recent $1.9 trillion COVID-19 relief package was just signed into law less than a week ago. The government is already discussing another massive spending package in the $2-4 trillion range, which some hope to finalize by May.  This is ostensibly for infrastructure and green energy spending, according to House Speaker Nancy Pelosi.  While some have raised questions about how to pay for all these programs, the pandemic has provided some possible insights as to how it might happen.  The money supply (M2) increased by 25% over the last year, which is a new record.

Another new record is the amount of debt relative to GDP here in the United States.  We are approaching 125%, which signifies that our debt exceeds our annual economic output by 25%.  Even if we do not decrease the amount of debt, we can bring the ratio back down by increasing economic output, or GDP.  I believe more effort will be put into increasing GDP than into reducing the amount of government debt outstanding.  The difficulty with increasing GDP in the current environment is that it takes nearly $4 of currency to create $1 of additional GDP.  So, we are likely destined to see massive amounts of currency continue to be introduced into the marketplace to raise GDP enough to make servicing our debt look sustainable.  In the meantime, prices for everyday necessities will continue to rise.

It’s not like they didn’t warn us.  The Federal Reserve announced last year they desired to allow inflation to rise higher than 2% for a while to elevate the overall average rate.  This has already had a beneficial effect on gold and silver prices, and this policy is set to continue for at least a couple of years.  There is also an effort to raise the minimum wage to $15, which might prove to be inflationary in the years ahead.  The significant rise in the prices of many commodities this year, including oil, signals that prices for additional goods and services will be soon to follow.  For example, lumber costs that are up 200%, in turn, increase the costs of construction and manufacturing for anything made with wood.  When agricultural commodities rise in price, that rise causes inflation to increase at restaurants and grocery stores.

One of the most significant indicators of future inflation is a rising oil price.  Oil is up nearly 100% since this time last year.  Many Americans are already feeling this when they fill up at the gas station.  But higher oil prices affect much more than our daily commute.  Most everything we consume here in the United States – food, school supplies, clothes – comes from across the country or around the world.  Consequently, those items must be shipped, flown, driven, or sent by train to get to us.  Higher oil prices filter into higher prices for most goods and services used by Americans today, including gold and silver.  After all, mining still takes oil to get gold and silver out of the ground.  A rising oil price translates into higher support levels for gold and silver prices.

There is additional concern that we will see a specific type of inflation in the economy known as “stagflation.”  Stagflation is when an economy experiences both a stagnation of economic output and inflation of prices, simultaneously.  The United States experienced stagflation in the 1970s, due, in part, to oil shortages and rising oil prices.  It remains to be seen if the efforts to increase GDP and avoid stagflation will be fruitful this time around.  One tool that was available to curb inflation in the 70s, but is less available now, is higher interest rates.  In the 1970s, the government debt levels were nowhere near where they are today.  Debt to GDP was around 40% in the 70s, versus nearly 125% today.  Interest payments were a minuscule consideration then, so higher interest rates were not nearly as painful as they would be today.

I believe that the quest for higher GDP combined with an artificial limit on interest rates will lead to significant inflation in the months and years ahead.  While it remains to be seen whether higher oil prices will help bring about another period of stagflation, it is comforting to know that gold and silver have performed relatively well during periods of both inflation and stagflation.  Sometimes performing well means protecting purchasing power to buy necessities in the future, and sometimes it means protecting a retirement nest egg in the present.  In either case, nothing shines like gold or silver.