The Importance of Gold Through History: Sumerian Roots 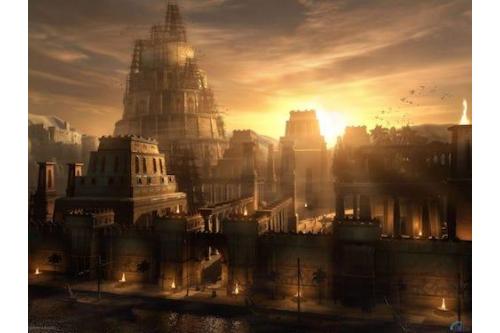 The Importance of Gold Through History: Sumerian Roots

Even from the earliest days of recorded history, gold has connoted value. People either used it as currency, hence the Gold Standard, or employed it in the service of the rich and powerful. Ruling classes adorned themselves with gold ornaments to make a point: they were large and in charge.

Gold also tended to hold a prominent position in religious practices. Many utensils were either coated with gold or made entirely of the substance. In that regard, gold signified immortality, perhaps explaining why the “god-kings” would later signify their rules with golden crowns, staffs, and other tokens.

In Sumer, one of the earliest civilizations, gold played a role in almost all of its daily activities. The region, translated as the “land of the civilized kings,” once rested where modern-day Iraq and Kuwait now stand. While gold wasn’t a natural resource, the Sumerians traded for it often and used it to create dining utensils, jewelry, and ceremonial objects. 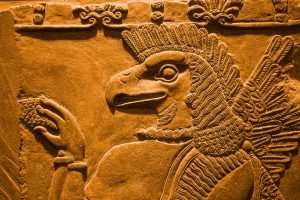 
The land of Sumer may be a bastion of oil and gas today, but the people who initially populated the area knew nothing about the liquid gold resting beneath their feet. They sought the land for a more basic reason: water. It nestled between the Euphrates and Tigris, hence the eventually Greek-named Mesopotamia, or “land between the rivers.” The land also contained rich, fertile soul because of mountain run-off. The Sumerians capitalized on the resources, producing foodstuffs that could be traded with other civilizations.

As a result, the Sumer area became the seat of the world. People would come by land and water to trade gold, copper and other metals, wood, and precious stones for the Sumerian’s agricultural products and manufactured goods. They might have come for the local brew, too; according to some historical sources, the Sumerians boasted a mead concoction said to delight the heart and liver. 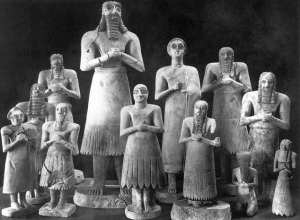 
The land of Sumer also claimed ethnic diversity, perhaps because of the different people groups that migrated to the area. Some of the earliest settlers included the Ubaidians and Akkadians. Not much is known about them prior to their arrival in Sumer, but most historians believe they were hunters and gatherers who transformed into farmers, city builders and dwellers, and bureaucrats.

The people retained their fighting roots. The different groups, which typically formed into separate city-states with a dedicated city-state god and practices, frequently warred over water rights. In spite of the incessant infighting, the Sumerians maintained a political stability and military might that made them invulnerable to outside attack for thousands of years.


The Sumerians followed a polytheistic religion, with the main gods numbering three: Ea, An, and Enlil. Each god featured companion gods and goddesses; for example, Isimu, a two-faced god, served Ea. Other mythical creatures attended the gods and goddesses and sometimes acted as intermediaries between the gods and the human race.

The Sumer people more-or-less beheld the gods much as the Greeks would a few centuries later. The Sumerian gods exhibited the same flaws and suffered the same fates as mortals. Despite the view, the Sumerians believed the gods were responsible for establishing their civilization — a triumph of the gods’ ability to create order out of chaos — in the fertile plain between the Euphrates and the Tigris.


Sumerians used gold for just about everything but currency, which either highlights or negates their esteem for the material. The former more likely is the case; during this time period, people associated gold with prestige and immortality. They thus employed gold in the service of the gods and the elite, making filigreed jewelry, chains, headdresses, and assorted utensils for secular and religious use.

The Sumerians also seemed to view gold as a very long-term investment. They typically buried the ruling class with an assortment of gold jewelry and accessories, including mugs for after-life social functions; food and toiletries; and an entourage of servants. In terms of scale, only King Tutankhamen’s tomb can compete with the loot found at the excavation of Ur, a then-popular travel destination.

The Sumerians may be long dead, but their artifacts live on and bespeak a culture in love with the arts and sciences. The people also were intelligent and clever. They examined their resources, including gold, and demanded that they produce a profit. In doing so, they expressed an innate understanding of gold’s long-term value. They traded for it freely and used it excessively to honor the gods, the living elite, and the dead.