The Symbolic History of the Turban Head Eagle Gold Coin 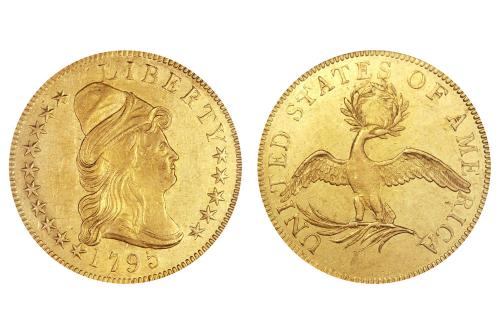 The Symbolic History of the Turban Head Eagle Gold Coin

As a 10 dollar gold coin, few designs compare with that of the Turban Head Eagle, also known as the Capped Bust Eagle. These gold coins do not actually feature a turban, as their nickname might suggest, but rather a woman who appears to be wearing a turban.

Instead, the image minted into the gold shows a woman with a pileus, a hat made of felt that originated in ancient Greece where it was worn by freed slaves. For this reason, it became a symbol of freedom from bondage that was later referred to as a liberty cap.

The gold Turban Head Eagle coins were minted between the years of 1795 and 1804. The image on the two variations of the gold coins was created by an engraver named Robert Scot. Some people believe that the woman depicted is based on Martha Washington, the wife of the United States' first President, George Washington.

Although the Bureau of the Mint was authorized in 1792 to strike this particular eagle coin, it did not do so until 1795, opting to focus on minting silver and copper coins first copper and silver coins first.


The Debate Over the Coin

There are great debates and fascinating aspects of these particular 10 dollar American Eagle coins because so much historical research has gone into studying them. Some historians believe that rather than the woman wearing a liberty cap, she is simply wearing a mob cap that would have been a fashionable hat at the end of the 18th Century. Others point out that the eagle appears to be holding a palm branch in one depiction of the eagle on the reverse rather than an olive branch.

Another noted detail of the Turban Head design is that Scot may have made a faux pas and depicted the eagle from the Great Seal of the United States, holding arrows in its right claw rather than its left, and olive branches in its left claw. In terms of symbolism, this would represent that the early United States preferred war to peace. While perhaps humorous, this was most likely not the intended message.

Some historians believe that George Washington himself provided the gold needed to mint the first several hundred of these American eagle coins. This is doubtful because it would have been impractical for the early President.

Due to the technology for producing dyes at the time, the gold coins often had differences that would not be found today. In some cases, the dye was merely altered by an engraver to change its date for a new year. In others, there are cases where the palm branch depicted shows nine leaves instead of 13.

Unfortunately for the Turban Head Eagle, at the time it was not similar to the Louis D'or of the French nor the Guinea of the British. Because the coin did not have an equivalent, it was not nearly as popular with traders.

In addition, many citizens of the early United States felt the eagle shown on this coin was too skinny and not imposing enough to represent the nation. New designs for the Turban Head Eagle were sought and implemented during later gold coin minting that satisfied the public's desire to see a strong and powerful eagle that represented what the U.S. should try to become one day.

As we've seen, whether referred to as the Turban Head Eagle or the Capped Bust Eagle, this is one coin that has a fascinating history and is sought after by collectors today.

Posted in: History , Gold
By U.S. Gold Bureau
More from this author
Did you like this post?
0
0
Search The Blog
Categories
Recent Posts