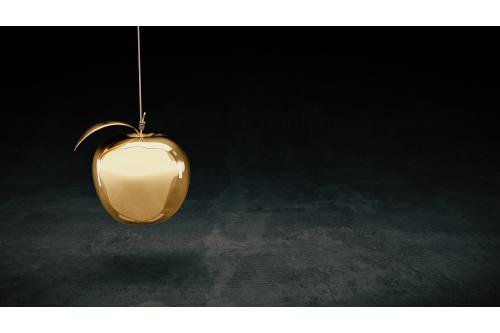 On the day of Apple’s new iPhone announcement, what are the possibilities for the future of gold and other precious metals?

All of Apple’s most popular products, ranging from iPhones, iPads, and MacBooks, utilize golden components or are even made from 18 karat gold, because of its high aversion to corrosion, reliability and overall efficiency. Even though silver is the best conductor of electric currents, it corrodes quite easily and while copper is super cheap, it is still too slow of a conductor for today’s computing tasks in most high demand tech. Gold finds itself in the “Goldilocks” zone for most tech products and electronics as the ideal and most useful precious metal in a wide range of popular products.


A typical iPhone is estimated to house around 0.034g of gold, 0.34g of silver, 0.015g of palladium and less than one-thousandth of a gram of platinum. It also contains the less valuable but still significant aluminum (25g) and copper (around 15g). Individually, a smartphone like the iPhone contains very little gold, but on a larger scale, the amount of gold used across its product line is astounding.

The number of smartphone users is forecast to grow from 2.1 billion in 2016 to around 2.5 billion in 2019, with smartphone penetration rates increasing as well. Just over 36 percent of the world's population is projected to use a smartphone in 2018, up from about 10 percent in 2011. In addition, users typically upgrade their phones every year, discarding their older phones for newer models.

As usual, Apple attempts to keep their product announcements under wraps are once again futile, as the inevitable leaks have already revealed that Apple is releasing a trio of phones, the iPhone XS, XS Max, and XR. The company is also reportedly reducing its prices for the next successors of the iPhone X to begin as low as $600 for its new “entry-level” model while ranging to $1000 range on its higher-end models. Apple seems to be employing this wide range of pricing as a new strategy to potentially sell more phones to a wider consumer base. Last quarter, the pricier iPhone X helped increase the iPhone's average selling price (ASP) to $724, which was well above expectations. Apple is expected to roll out at least three new models, the iPhone XS, XS Max and the more affordable iPhone XR as well as an upgraded Apple Watch with the Apple Watch Series 4.

But these profits are definitely not the only indicator of Apple’s success. In its annual environmental report, Apple said it reclaimed 2,205 pounds of gold through its newer recycling program where customers turn in broken or unwanted iPhones, iPads and MacBooks for store credit, last year.


Yes, you are reading that ton of GOLD correctly


Apple’s recovery of over a ton of gold from discarded products yielded a potential $40 million worth that the public essentially handed back over after paying retail prices for their products in the first place.

As gold is still trading at around $1,200 per ounce, it remains one of the most valuable components in all of Apples discarded products. Through its e-waste recycling program, Apple reclaimed 71 percent of its total weight in product sales last year.

If the new models of iPhones sales perform as well as the iPhone X and past iterations of iPhone, Apple can expect to sell over 160 million phones. Apple hopes that number will likely be higher based on the new models’ reported affordable pricing as well as rolling out three phones instead of just one.

Not to be outdone, Samsung’s new Galaxy S10 is expected to launch in or around February 2019. Google’s Pixel 3 and 3 XL will also release this October.

And as smartphones become more and more affordable and necessary in the present and not so distant future, more and more products will continue to utilize golden components because of their use not only with just smartphones but also in the broader electronics market as well. Laptops, tablets, televisions, and countless other electronic devices depend on golden components. Could gold’s efficiency and reliability in electronics affect its worth in an ever-growing technological landscape?

What impact could smartphones potentially have on gold’s worth if and when more than 36 percent of the population owns a smartphone? Year after year, the demands for a supercomputer that fits in our pocket will not subside, and as older generations of phones may lose their worth to consumers, they still retain a relative amount of wealth because of their gold components.