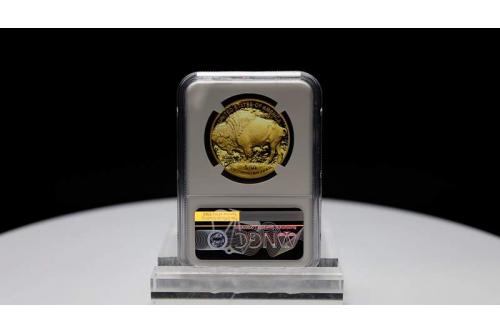 The Gold American Buffalo is a true American icon. Revered not only for its artistic legacy and nod to Native American culture, the Buffalo is the first 24-karat gold proof coin ever produced by the United States Mint.

While these laudable traits are widely celebrated, what's often overshadowed is the process of how the coins are physically produced. So today, we’re diving into the ins and outs of proof minting and the extraordinary efforts put forth to create these Gold Buffalo beauties.

The U.S. Gold Bureau is proud to offer our clients the chance to add a 2019 Gold American Buffalo certified in perfect “Proof 70” condition to their investment holdings starting Monday, May 6th. Keep an eye on our site or give our team of Precious Metals Experts a call today to learn more (800-775-3504).

How is a Gold American Buffalo proof coin made?

The minting of any coin – proof or otherwise – starts by collecting the raw material that will be used to make the piece. This step can be carried out in a variety of ways depending on the particulars of the specific source. In the case of the American Buffalo, gold must be acquired from “natural deposits in the United States,” or in a U.S. territory.

The raw metal is then refined to remove impurities and cast into gold ingots, or bars.

Next, the ingots are “rolled” out into sheets that will be used to create gold “blanks.” The ingots are fed through two steel bars and flattened to the thickness dictated by final coin specifications. A fully minted Gold American Buffalo, for example, is 2.95 millimeters – or .116 inches – thick.

Once the rolled sheets are created, the process moves on to “blanking.” Here, circular pieces are mechanically punched from the gold sheets resulting in what is known as “blanks.”

While proof production is generally known for its diligent oversight and delicate approach, the minting steps to this point are quite harsh. During these messier initial stages, it’s possible for scrap metal and errant debris to mix with and contaminate precious metal pieces. To filter out such tainted blanks, the Mint initiates a step called “riddling,” by which a series of layered sorting screens sift out blanks of the wrong size or shape. The surviving pieces move on to the next step, known as “annealing.”

The surviving blanks must now be softened to allow for further processing. In a process known as "annealing," the pieces are heated to approximately 1,400 degrees Fahrenheit in a specialty oven and then “frozen” in a water quench bath to lock in the final “coinable hardness.”

While annealing is necessary, it can often lead to surface discoloring. Such imperfections are corrected by bathing the frozen blanks in a chemical solution before moving on to the next step.

After annealing, the softened and washed blanks proceed through the “upsetting” phase. Here, the pieces are placed between a set of rotating wheels and squished slightly to create a raised rim on both sides. Introduction of the rim has helped optimize the coining process by ensuring uniform sizing, providing for a secure fit within the coin press down the line, and allowing the excess metal to flow evenly into the recesses of the die during striking. After upsetting is complete, the gold pieces are henceforth known as “planchets.”

To ensure a planchet is of the proper weight and composition – which, in the case of the Gold American Buffalo is one troy ounce of 99.99% pure gold – each piece is assessed and tested. In his overview of the West Point minting process for Coin Update, Michael Zielinski notes that technicians use an optical emission spectrometer to verify several critical characteristics of the planchets, including metallic composition, weight, dimensions, surface roughness, and even interior grain size. A scanning electron microscope may also be used for impurity detection.

Planchets that pass inspection move on to what's known as "burnishing." In this step, the gold pieces are tumbled in a rotating barrel with small stainless-steel balls, which polish and smooth planchet surfaces. After burnishing, the planchets are again washed in a particular solution and sent through a round of ultra-sonic drying.

Each polished planchet is carefully placed on a tray in individual compartments and transported by Mint staff to the coining press.

Before the actual striking of coins can happen, special dies must be created to transfer the artist’s designs onto the coins themselves.

The die creation process for proof pieces starts with rendering the final coin design in full. Renderings can be created virtually from the get-go or cast physically in plaster first then scanned into digital form. The digital renderings are touched-up, reviewed and given final approval for advancement.

Once accepted, a series of stamp-like tools are created from the renderings. The “master hub” is made first by milling a relief – or raised – version of the coin design onto a small steel shaft. From the master hub, several “master dies” are created and bear incuse – or sunken – iterations of the design. Several “working hubs” are subsequently created from the master dies using extremely high-pressured hydraulic force to transfer the design yet again (back to relief form). Finally, hundreds of “working dies” with incuse designs are produced from the working hubs. These working dies will ultimately be used to strike the final coins. In modern-day proof coining, working dies must be created individually to maintain high attention to detail.

The visible elements of a coin’s design such as lettering, numbering, and images are known as "devices.” Conversely, the blank spaces of a design are known as "fields." The designs' fields are polished mechanically using a combination of horse-hair brushes and felt heads to achieve that proof-level high-sheen appearance, while a computer-controlled laser process gives devices their frosted finish. The resulting high-sheen-and-frosted-finish combo is known as the “Cameo Contrast.”

Before modern-day technologies, frosted finishing was achieved by “pickling” a die in an acidic solution that resulted in an etching effect across the entire surface of the die. The fields were then polished to create the Cameo Contrast variation. However, the pickling method produced etching that was quite delicate and would endure through only the first hundred or so struck coins, leaving the remaining lot to be struck in a uniform mirror-like finish. These coins are known as “Brilliant Proofs.”

Now that both the planchets and dies are complete, we move on to the final striking phase!

While non-proof processes feed planchets automatically into respective coin presses, proof planchets must be placed by hand to ensure the pristine integrity of the pieces is maintained.

Each proof planchet is struck a minimum of two times, allowing for the highest levels of visual quality to be achieved.

Upon final approval, the proof coins are removed one-by-one from the press – again by hand – and placed in protective packaging. Each time the pieces are handled by Mint staff, protective gear such as cotton gloves or soft-tipped tools are used.

NGC subsequently grades each Gold American Buffalo proof offered by the U.S. Gold Bureau. We and are proud to provide an inventory of certified “Proof 70” pieces that are accompanied by a certificate of authenticity hand-signed by former Mint Director, Ed C. Moy. Our exclusive PF70 2019 Gold American Buffalos will be available for purchase starting Monday, May 6th.