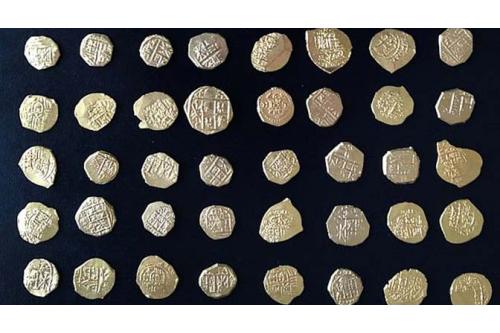 Then coins were lost at sea on July 31, 1715, when a hurricane sank a fleet of 11 Spanish ships which had recently departed Havana, Cuba.

A four-member crew from the Florida-based shipwreck salvage company 1715 Fleet Queens Jewels discovered the coins only 100 feet from shore.

“It’s something I will never forget,” company owner Brent Brisben said to ABC News. “To be one of the first people to touch these things in over 300 years is amazing.”

The rare gold coins were discovered during a regular excavation. Brisben’s company is responsible for salvaging items from the 11 shipwrecks. To date, he said that six of the 11 ships have been discovered.

Brisben said that he plans to sell the coins to collectors. However, given his contract with the State of Florida, he said the state is entitled to keep 20 percent of the haul. Before he can sell any coins, he will need to confirm what they want to keep.

1715 Fleet Queens Jewels can only conduct their search during the summer months, as it is the only time of year when the water is calm and flat. During this time, the crew leaves the docks daily at 6:30 am and return after the sun has set. In the winter months, Brisben conserves and documents the artifacts that he found.

In 2010, his crew discovered a bronze cannon filled with 50 rare gold coins and 40 rare silver coins. The combined precious metal coin find was valued at half a million dollars.

They also found an extremely rare gold artifact that year, which was appraised at $885,5000 and sold to a private collector in San Francisco, California.