Election is Good for Gold 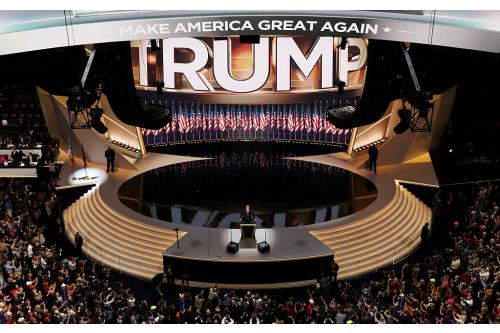 Election is Good for Gold

gold gold investing gold bars presidential election
On November 8, 2016, the United States will elect its next leader and likely push gold prices toward $1,650 - $1,850, regardless of who becomes the 45th President of the United States. Georgette Boele, a currency and precious metals analyst with the Dutch bank, ABN Amro, believes the presumptive inward looking fiscal and trade policies of a Trump presidency would weaken the fundamentals of the U.S. economy. Donald Trump has vowed to tear up existing trade agreements which would likely increase uncertainty, and increase the demand for gold. Boele’s pessimistic forecast cites Trump’s rhetoric as a catalyst for “domestic and international uncertainty at best, and upheaval at worst.” With a Trump victory, Boele predicts a 40% rise in gold in the coming years. Trump has had a long love affair with gold. “We used to have a very, very solid country because it was based on a gold standard,” Trump told an audience in New Hampshire. “It would be very, very hard to do at this point and one of the problems is we do not have the gold - - other places have the gold.” Boele remains bullish on gold with a Clinton presidency as well, believing that gold would find support from inflation outpacing growth, interest rates remaining negative, and a weakening U.S. dollar. Julian Phillips of Goldforecaster.com believes Trump’s push toward “protectionism” would be “disruptive and divisive for the global economy” and likely to increase the demand for gold. According to Phillips, a Trump presidency would decrease the global monetary system’s reliance on the U.S. dollar to a multicurrency framework and thereby place a higher need for gold in “official” hands to help steady the cash flows between nations across the world. The economic uncertainty facing not only the United States, but the global economy based on the November presidential election has created a bullish market for gold. In these turbulent times, it is important to take a proactive approach to protecting your hard-earned assets. The U.S. Gold Bureau is proud to feature the Ed Moy Signature Series Gold American Eagle Proof 70 coins, gold bars, silver coins and bars, precious metals, and investment grade diamonds to help clients diversify their financial portfolios with precious metals and within precious metals. Gold and silver can now be put into your IRA account and stored at your home. Speak directly with an Investment Specialist by calling (800) 775-3504.
Posted in: Investing
Did you like this post?
0
0
Search The Blog
Categories
Recent Posts