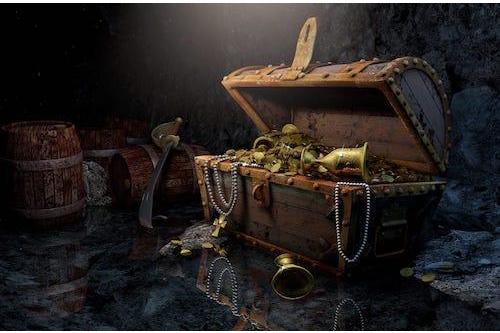 Israeli archaeologists recently unearthed a ceramic jar containing a trove of gold coins that is believed to have been buried a millennium ago. The Crusaders who fought against Muslim warriors in this part of what is known as the Holy Land are well known to have valued gold as highly as their opposition. This jug was buried in the ruins of a Crusader castle the Christian warriors are known to have defended for quite some time. In all, 108 eight coins were discovered with a total weight of 14 ounces which, by today's gold prices, makes them worth over $22,000 in all. However, their value clearly extends beyond the worth of their gold content.

The fortress the gold coins were discovered in is located in Arsuf which lies about 9 miles from modern day Tel Aviv in what is today part of Apollonia National Park. The site is located atop a cliff along present day Israel's coast and was hotly contested territory during the 12th and 13th centuries when the gold was believed to have been hidden beneath a tile floor there. Objects made from precious metals formerly held by the Crusaders are not commonly found in Israel, according to the lead archaeologist.

The site of this discovery is where famed Crusader Richard the Lionheart, King Richard the First, defeated his Muslim foe, Saladin during a storied victory in the 1300's. Eight decades later, the Muslim army would return to lay siege to the city until its outer walls fled and the knights defending it fled to the fortress, but that fortress was also eventually obliterated. It is here that historians believe the Knights Hospitaller lived and it is that group that is believed to have been paid the gold for the activities they regularly conducted during that era.

NBC News reported that some of the gold coins were actually from the 1100's and believed to have been minted in nearby Egypt. The next step after this incredible discovery is studying. The next six months will be a time of learning for scholars and collectors alike as they examine the coins, trying to learn more about them and the time periods they were created during. What is of incredible interest to most academics is that by understanding these coins and why they were found where they were, it is easier to understand macroeconomic activities during the time periods the coins are from.

For collectors, the chance to see gold coins from this time period is an extraordinary one and goes far past the mere $22,000 value. These coins are quite literally priceless due to the light they can shed on historical production of such coins in this part of the world. While it is well known that gold coins have long circulated in the Middle East, few examples survive. If these are in good condition, they will be able to tell scholars a great deal about how they were made.

Discoveries of this caliber are often made only once or twice in a lifetime and that is precisely what has archaeologists and coin collectors alike so excited about this find. To think that a humble ceramic jug held such a treasure for a thousand years is certainly testament to gold's ability to resist the forces of decay.

Posted in: History
By U.S. Gold Bureau
More from this author
Did you like this post?
0
0
Search The Blog
Categories
Recent Posts