Is the Bitcoin Bubble About to Burst? Rather Put Your Faith in Gold. 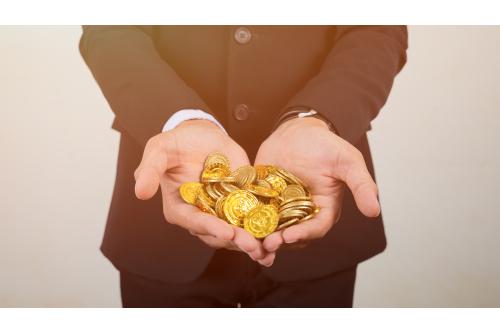 Is the Bitcoin Bubble About to Burst? Rather Put Your Faith in Gold.

Readers of my writings will know that I am no great believer in the staying power of Bitcoin. If a rising gold price is an indicator of lack of confidence in fiat currencies, and in the US dollar in particular, and is suppressed by the powers that be accordingly - as those who believe in gold price manipulation suggest - then this should also be applied to bitcoin, but many times over. How long before governments step in to control it too? It represents a potential form of payment for goods and services which falls below the radar and outside any kind of governmental control – at least for now.

If governments are trying to withdraw high denomination banknotes from circulation as they potentially provide a means of circumventing what might be deemed as illicit payments by criminal entities and taxation dodgers, then how much more so should they be attempting to regulate bitcoin, already the chosen payment method for the scammers and criminals who have made ransomware a hugely profitable criminal enterprise. No doubt it is being used for a host of other below-the-counter criminal activities and tax avoidance schemes being, so far, outside the control of the bankers and the regulatory authorities. No doubt bitcoin promoters will tell you that the way bitcoin is set up it will remain outside the capabilities of governments to regulate it or tax it – but where there’s a will there’s a way and the more profitable something like bitcoin becomes, the greater the incentive to control it and tax it. Something like a $10,000 price level could provide just the stimulus needed to begin exerting such controls. And once one government, or regulatory body steps in others will surely follow. At that point one of the principal raisons d’être for any bitcoin value growth will fall away and an inevitable price decline will ensue. And it won’t just be a decline – it is likely to be a price rout. It will happen – the only real question is at what level will bitcoin be when the bubble bursts. Once a price decline starts who know where it will end? Bitcoin has no inherent value like gold. If there is a global economic collapse, which looks more and more likely almost every day as the world drowns in a sea of debt, who will take an intangible asset like bitcoin as payment for a debt? Gold – yes, it has stood the test of time and most of the world considers it the ultimate money. As JP Morgan himself said ‘Money is gold and nothing else’. Gold has always been THE currency of last resort, and a store of wealth. People of almost every culture have always had confidence in it, but bitcoin is untested and is only supported by a series of ones and zeros in a computer program. There will be no confidence in it when the crunch comes. There may be some short term gains still to be achieved in bitcoin, but at every potential psychological inflection point – like $10,000 – the risk of a bursting bubble increases dramatically. Rather put your faith in gold as the ultimate wealth protector. Gold may not offer the price volatility of bitcoin (which can be apparent on the downside as well as the upside), but in the long term it will likely help you preserve wealth as it has done for many hundreds, if not thousands, of years. You can hold gold in readily exchangeable forms like gold coins and small bars, keeping it outside the banking system, which is potentially subject to government regulatory controls. You can hold a decent amount of it at home as it is compact and easily stored, or in vaults at home and abroad, although in a real financial crisis such vaulted gold may not be rapidly, or easily, accessible. Other precious metals have the same facility but the only other one which may be easily usable in a crisis is silver and while its lower value may make it more easily exchangeable for goods and services at a fair price, the storage space necessary to hold it at home will be correspondingly greater because of its lower intrinsic value. But, in the writer’s view, holding some gold on hand may well be the best way of tiding you through an economic crisis, or a stock market collapse, should one occur. We don’t necessarily think this will happen, although some very high profile economists have issued some pretty dire warnings. But think of holding gold as insurance against the worst happening – and unlike traditional insurance it will probably grow in value over time too and you will be able to cash it in, or pass it on to your heirs, should you wish to do so and haven’t had the necessity to draw on it in the meantime.
Posted in: Investing, Gold
By Lawrie Williams
More from this author
Did you like this post?
0
0
Search The Blog
Categories
Recent Posts