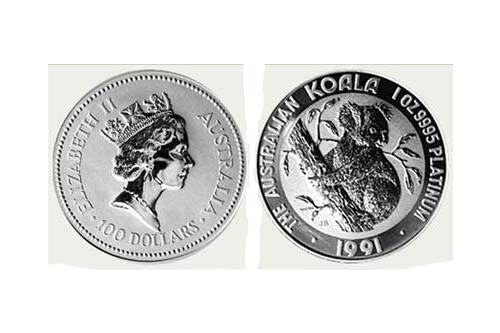 Australia was the first major nation to announce that they were going to mint a full one troy ounce and various sub denominations platinum coin. First introduced in 1988 and struck at the Perth Mint, this coin features a low relief image of a Koala bear on the obverse with a picture of Queen Elizabeth II. In all of its different sizes, the Koala is registered as legal tender in Australia and each coin has a true face value. For example the one troy ounce Koala shows a face value of 100 Australian Dollars, which is far below its actual value based on the spot price of platinum on the open market. While the Platinum Koala may be one of the most intrinsically beautiful platinum coins on the market, the mint in Perth never attempted to promote these coins for investment purposes.

Because of this they never reached the primary markets in the US in any great number and the only way you are likely to be able to find them is in the secondary markets. This lack of production and marketing in the US ensured that these coins were never much in the way of competition for the Platinum Eagle here in the US. When these coins were first introduced, there was a high interest and demand for platinum bullion and coins by investors as they sought an alternative to gold. This interest quickly drove the price of platinum to the point where many investors lost interest and the market for these and all platinum coins dried up. Even though the Platinum Koala is still considered to be one of the most beautiful coins minted in the world, it is almost impossible to find coins for the current year.

In fact investors who want to buy Koalas as a part of their overall investment strategy are having a hard time finding them. The same holds true for the Platinum Eagle, even though it has long been considered to be the most successful platinum coin ever minted. Australia's Platinum Koala coins come in individual hard plastic capsules and are assayed at .9995 pure platinum no matter what size coin you are looking at. Each coin is legal tender and registered as such with the Australian government. While each coin has a face value, they are worth their weight in the current spot price for platinum in the metals markets. Generally speaking they are not considered as collectors coins and as such do not demand a higher price than the current spot price.