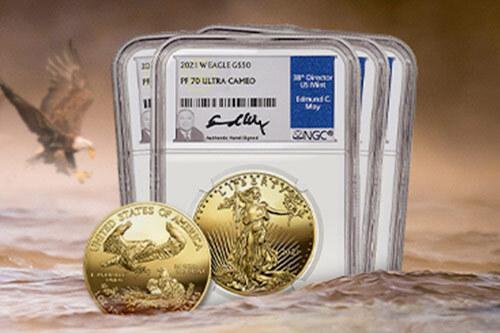 Like its silver counterpart, the Gold American Eagle Proof program will have multiple releases throughout 2021. The March releases will feature, for the last time, the same obverse-reverse design combination that has been struck on the coins since the Gold American Eagle program’s inaugural launch in 1986, while the issues released later in the year will feature a new reverse design (the obverse will reportedly remain the same for the time being). This imagery makeover marks a genuinely momentous evolution in the history of this world-renowned coin program that has come to be revered not only for its investment significance but also for its premiere artistry.

Clients of the United States Gold Bureau will have the opportunity to add these important Gold American Eagle Proof pieces to their investment portfolios shortly following the Mint’s March release. Like the Mint, the U.S. Gold Bureau will offer all four of the program’s sizes for individual investment or for purchase as a four-piece set. While coins purchased directly from the U.S. Mint do not come graded, the U.S. Gold Bureau is proud to offer 2021 Gold American Eagles to clients graded at the highest PF70 level, as certified by the Numismatic Guaranty Corporation (NGC). A coin grade is a standardized indicator recognized across the precious metals investment sector that officially certifies a coin’s condition based on a variety of metrics. Grades can often bolster a coin’s investment value, with higher-graded coins typically reaping higher rewards.

For its now three-and-a-half-decade tenure, the Gold American Eagle coins – both bullion and proof versions, in all four denominations – have featured the same obverse and reverse designs. The obverse image harkens to the “golden age” – no pun intended – of American coin artistry with a replica of Augustus Saint-Gaudens’ pre-1933 double eagle obverse design, which shows a glorious image of Lady Liberty striding confidently forward, hoisting a flaming torch high into the air with one hand and holding an olive branch in the other. Liberty is set against a backdrop of a radiantly beaming sun rising over the horizon, presumably indicating the dawn of a new day graced by liberty and freedom. As of now, the Gold American Eagle obverse design is reportedly staying unchanged, save for a few “refreshments,” according to the U.S. Mint.

The original Gold American Eagle reverse design, which will be struck for the last time on each of the four denominations of the Proof versions set to be released this week, was created by Miley Tucker-Frost (working as Miley Busiek when she created the design) and features a mother eagle cradling a hatchling against her chest as another eagle descends toward the nest with a branch in his talons. The artist has remarked that she took inspiration for her image from Ronald Reagan’s 1980 Republican National Convention acceptance speech, which was centered on the themes of “togetherness” and “a new beginning.” From the soon-to-be president's words, Tucker-Frost developed her idea to show the symbolic American bald eagle not as a standalone icon, as it had often been portrayed on U.S. coinage to that point, but rather as an integral part of a family. With this family unit image, the artist aimed to demonstrate the importance of family values in nurturing the next generation and ensuring the long-term well-being of those in the future.

The new Gold American Eagle Proof reverse design – which will appear on additional issues of the coin launching in the summer of 2021 – will look quite different from the coin’s inaugural imagery. Rather than depicting the American eagle as part of a nuclear family, as Tucker-Frost did, this new work, created by Artistic Infusion Program Artist, Jennie Norris, will focus on a single eagle. Norris’s depiction shows a close-up profile portrait of an American bald eagle that strikes the viewer as particularly magnetic with its intense gaze. In a recent CoinWeek article on the new designs, the artist explains that the bird’s serious fixated stare was intended to symbolize the “pride and wisdom passed down through generations of time.” Norris points out in her bio that, through her work, she aims to demonstrate her “love and excitement for nature in hopes of inspiring others.” Perhaps influencing her Gold American Eagle reverse design, she has volunteered with the Arizona-Sonora Desert Museum’s Raptor Free Flight program as a Raptor Handler.

The new reverse design will continue to include the standard Gold American Eagle Proof inscriptions: “UNITED STATES OF AMERICA,” the nation’s motto, “E PLURIBUS UNUM,” “IN GOD WE TRUST,” the coin’s face value and weight of “FINE GOLD” contents.

While each coin does indeed boast a unique legal tender face value, these “values” are primarily nominal. As with investment-geared precious metals pieces in general, the items' realized values stem more from influencers like supply and demand, relative rarity, and other such defining characteristics.

Today's Gold American Eagle Proof coins are struck at the West Point Mint in New York State and bear the "W" mint mark. While not officially deemed part of the United States Mint until 1988, this East Coast outpost boasts an impressive legacy in its own right. It was built in 1937, four years after President Roosevelt called for all privately held gold in the country to be sold back to the U.S. government amid the Great Depression. In its early days, it was nicknamed "The Fort Knox of Silver" thanks to its original functioning as a bullion depository that primarily stored silver bullion. The West Point facility even served as the site of production for several runs of U.S. coinage before it was officially part of the Mint, with the now-famed "W" mint mark appearing on coins as early as 1983 – half a decade before the outpost gained formal entry into the U.S. Mint's network of regional branches.

Bullion versions of the Gold American Eagle – and any other coin or bar, for that matter – are valued by their precious metal weights and priced in accordance with the Commodities Exchange (COMEX). They, therefore, toggle up and down in price as dictated by the market rate of the piece’s primary metal. This shifting, market-tethered value is known as the "spot price" and is similar in behavior and nature to other market-based commodities’ values, such as oil, natural gas, and wheat.

On the other hand, investment-grade proof coins are not tied to the commodities or any other exchange market. Their values are derived from supply and demand factors within the investment sector – much like real estate and other tangible assets – and, as a result, tend to be much less volatile. This relative stability and freedom from market manipulation by governments, banks, and other geopolitical forces make proof precious metals coins attractive assets for slow-and-steady-minded investors seeking safe havens for their hard-earned wealth in the long term. The forthcoming 2021 Gold American Eagle Proof coins fall into this category of investment asset.

Additionally, Gold American Eagle Proof 70 sets – like those offered by the U.S. Gold Bureau – have shown a general, overall upward trajectory in value for the past decade or so. In 2010, the price of gold began rising, triggering a period of increasing values for both bullion and proof gold coins. Within a span of about six years, from 2010 to 2016, investment-grade proof gold coin values ticked upward even more, even as gold bullion prices began stalling, further bolstering the price of Gold American Eagle Proof 70 coin sets. For each of the last five annual installments of the Gold American Eagle Proof 70 four-coin set – dating back to the 2015 release – the sets have consistently enjoyed positive price increases, often exceeding 100% gains overall from the release date to the present.

Posted in: Investing, History, Gold
By United States Gold Bureau
Did you like this post?
0
0
Search The Blog
Categories
Recent Posts