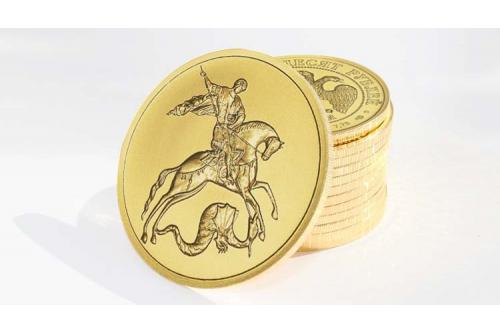 bullion gold coins The History of Gold russia
When it comes to gold bullion coins, there are a range of choices that investors may choose from that are minted by some of the world's most respected banks. Some of the more popular gold coins that have been minted around the world include the Gold Eagle from the United States, the Gold Maple Leaf from Canada, the Gold Krugerrand from South Africa, the Gold Libertad from Mexico and many more.

But, what about Russia?

However, when choosing to have a gold investment collection, it is sometimes wise to think outside the box and diversify. The Russian Gold Saint George the Victorious coins may help you do just that. These coins have a lot of interesting facts surrounding them that will help you understand why they are so valued by both passionate investors and collectors.

The Russian St George the Victorious gold bullion coin is minted by the Central Bank of the Russian Federation which issues commemorative and investment grade coins made from precious metals like gold and silver. The Gold George, as it is sometimes called by collectors, was minted because Chervonet gold coins, known as the Sower, were no longer being made after the 2000's.

In 2006, George the Victorious coins first began to be produced so that those who wanted a gold investment from Russia could have one of great quality. During that first year of minting there were 150,000 coins minted, but by the next year, half a million were made.

The peak year was in 2008, just as the world economy took a nose dive, when 1.5 million Gold George coins were minted in Russia. None of these coins were produced in 2011. Since plans exist for a new gold coin in 2012, it is expected that these coins will now be more valuable due to production having ended. The gold George the Victorious coin is worth 50 rubles at face value. In 2012 exchange values, this would be about $1.50 in US dollars but obviously the gold bullion value of the coin far exceeds this, coming in at closer to $400 per coin. This is another example of how gold's value is often more stable and higher than a currency's.

Each coin contains 0.2537 troy ounces of gold that has a fineness of 99.9% that collectors absolutely love. The design, however, is where this coin really shines in the eyes of many collectors.

The double headed eagle is found on the obverse of the George the Victorious gold coin; this is a symbol for the Central Bank of Russia. It is depicted with its wings down and tongues protruding from each of its beaks as if it were vocalizing. The writing on this side of the coin reads 'Bank of Russia' and '50 Rubles'.

On the back side of the coin one can see the image of Saint George and the Dragon, a reference to a popular Russian story that has ancient roots and is important in that nation's cultural heritage. The images were created by artist and sculptor A.V. Baklanov. For those that want an exceptional gold bullion coin with an interesting back story, this can be a very fine choice. 2012 will bring a half ounce gold coin from Russia that will be valued at 100 rubles, but this coin may never be minted again so it is definitely one worth purchasing for those who can afford its price tag.
Posted in: Investing , Gold
Did you like this post?
0
0
Search The Blog
Categories
Recent Posts