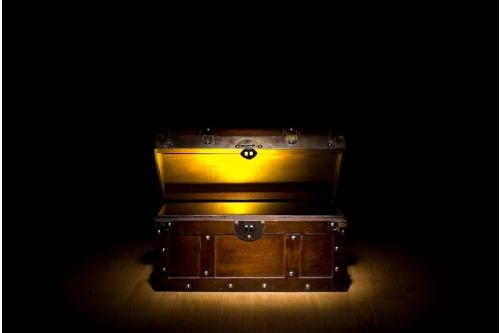 An Instagram artist has created a coin that is absolutely crushing the Internet. Last week, Roman Booteen posted on his Instagram on his Instagram a video of a coin with a wild hidden feature that is currently going viral on the Internet. Booteen uses a 1921 US silver dollar coin, on which he has carved a depiction of a knight and a woman with the knight’s attention toward a wall with etchings all-around a darkened window. However, Booteen has allowed for the knight’s sword to be removed from its sheath, (he removes the sword with a pair of tweezers) as the sword doubles as a key, which unlocks what is behind the wall. As the video illustrates, the key fits perfectly into a small notch on the obverse of the coin. Once it is fully inserted, the wall transforms into a window allowing the holder of the coin a view of the hidden treasure that lies behind the wall; a golden grail. Roman Booteen creates other coins, some depicting golden Mesoamerican style engravings, scarab beetles, skulls and other wild pop-culture imagery, some with hidden features similar to his “holy grail” coin. Booteen also beautifully engraves zippo lighters in addition to the custom coins and “Hobo Nickels.” While Booteen does not have these coins available for sale, it seems that with the attention he and his coins are receiving, that his creations will soon be available for purchase. Every so often, Booteen’s coins will appear on eBay auctions. Just last year a coin that “bites” your finger sold for over $10,000 on eBay. Keep an eye on his Instagram page for more updates from Booteen, himself.

In 2007, the Royal Canadian Mint produced the world’s first million-dollar coin at their Ottawa facility. This coin is 3 centimeters thick and 53 centimeters in diameter, weighs 100 kilograms (220 pounds) and is a 99999 pure gold bullion coin with a million-dollar face value and was originally conceived as a unique showpiece to promote the Mint’s new line of 99999 pure 1 ounce Gold Maple Leaf bullion coins. After several interested buyers came forward, the Mint decided to make a very limited run of the Million-dollar coin available for sale. As of now, investors from Canada and abroad have purchased five of the 3.125 troy ounce gold coins. The coin’s design features the queen in maturing dignity, without a tiara or crown, with the reverse design featuring a stylized maple leaf. Guinness World Records recognized the “Big Maple Leaf” Million-Dollar coin as the world’s largest coin in October 2007. In March 2017, one specimen of the Big Maple Leaf coin was stolen in from the Bode Museum in Berlin. Though the coin has a face value of $1 million, by weight alone, it would be worth roughly $5.8 million at market prices. Arrests have been made, but the coin has not been recovered. Experts think that the coin may have been melted down and ready to cash in on the amount of gold used in the manufacturing of the coin. If this coin is indeed melted down, now only four remain.

The DC Universe hero has finally broken out of the confines of the coin. This 3D statuette features The Man of Steel emerging from a 10-ounce pure silver gold-plated coin. The idea for “Superman: The Last Son of Krypton” first came about when the Royal Canadian Mint’s R&D team was working on The Sculpture of Majestic Canadian Animals series, which features animals such as the elk and grizzly bear rising out of coins as gold-plated statuettes. Released in August of 2018, only one thousand “Superman: Son of Krypton” coins were minted and are currently sold out on the RCM’s website, which had retailed the coin at $1,199.95 CAD. Jason Fabok, artist and designer of the new Superman coin, saw the Majestic Animal series and thought, “wouldn’t it be cool if Superman could be literally busting out of the coin? That new technology was just begging to be used with Superman.” Royal Canadian Mint engraver Mathew Porter ultimately sculpted the statuette. Fabok, who normally draws for comics, was tasked with the initial design of the three-dimensional coin, sketching the hero from every angle: front, back, side, top-down and three-quarter profile. This version of Superman had to be presentable from every angle.

Silver Piston, aka Steve West, is an Atlanta based artist whose creations are mostly made from Indian Head Nickels. Instead of just keeping the nickels as coins, he, along with craftsman Shane “Hobo” Hunter, carve intricate “Day of the Dead” and motorcycle style designs onto the Indian Head along with other intricate designs, cuts some out and turns them into rings, necklaces, earrings, key chains, lighters and other various objects. West got his start in jewelry making from taking classes at the Savannah College of Art and Design and started using the Buffalo nickels in 2013. “…There was something about how authentic they were. I’ve always thought there was something very American about what showed,” when using the Indian head nickels as his canvas. The nickels West creates are absolutely stunning as the rings sell from $160 to $400, for hammered silver or nickel rings. He also has golden rings with his Indian heads mounted on them that start at $1,600. Shane “Hobo” Hunter creates intricate metal carving, mostly on Hobo Nickels. He collaborates with West of Silver Piston but also runs his own operation carving skulls, pop culture figures, musicians and various other designs and imagery on his coins. Check out his Instagram page for more images of his fantastic work.

This “green” currency is produced in Benin and was limited to 999-minted specimens, making this silver coin a high yielding asset for its collectors.   Issued by authority of the West African Republic of Benin, this coin is the first in a series of “famous plants around the world,” the 100 Central African Franc denominated legal tender coin features Cannabis Sativa. The silver-plated coin features a bright green Cannabis Sativa leaf that, when rubbed, releases the herb’s distinctive aroma.