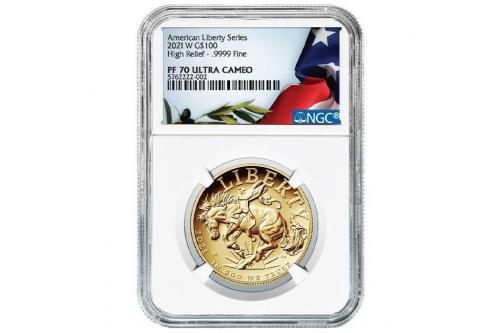 The United States Gold Bureau is now offering this Ultra High Relief coin in perfect Proof 70 condition. Find more information by clicking on the product to the right.

The American Liberty Gold Coins and Silver Medals Program began in 2015, intending to celebrate "modern interpretations of the concept of American liberty." Designs developed under the banner of the program are struck first on 24-karat gold coin issues and later on silver medals for a selection of the designs.

On its obverse, each coin and medal in the series features a reimagined image of Lady Liberty herself or the idea of liberty at large and a "contemporary" iteration of an American eagle on its reverse.

As the Mint points out, renditions of Lady Liberty, from her appearance to her pose, have evolved throughout U.S. coinage history "to reflect a changing America" while still representing the values and ideals she has stood for all along. The American Liberty coins and medals program is the perfect example of this evolution, as the program seeks to recast Liberty, or the idea of liberty, in visual renditions more aligned with today’s America.

The 2021 issue is the fifth gold-coin installment of the American Liberty program. Like all those that have come before it, it aims to represent the meaning that the idea of liberty holds for each of us, as individual Americans and as a collective nation. This year’s obverse design is a departure from depictions of Liberty that have graced the front side of these coins – and the majority of American coins, for that matter – to this point. The 2021 obverse motif does not represent a human manifestation of Lady Liberty at all. Instead, it features the image of a bucking mustang horse with a western-style saddle on its back – a far cry from the traditionally allegorical or even modern-day visuals that depict Liberty as a female figure. According to the Mint’s product  description, this current-year design is a “bold and breathtaking representation of the determination and power of the passion for American liberty.” It elaborates that the image of the horse bucking the saddle that is affixed to its back – and presumably, the rider who previously sat atop it – harkens to the American Revolution, during which our forefathers bucked “the yoke of the British rule” in their pursuit of liberty and self-governance. A beaming sun radiates behind the Mustang, while the word "LIBERTY," the coin's "2021" strike year, and the United States motto, “IN GOD WE TRUST,” line the top and bottom edges of the coin. The obverse image was designed by a member of the Mint's Artistic Infusion Program, Beth Zaiken, and sculpted by Medallic Artist Craig Campbell. The initials of both artists appear on the coin's obverse.

The reverse of the 2021 American Liberty High Relief Proof Gold coin features a striking close-up image of an American eagle that, coincidentally, is quite reminiscent of the image on the reverse of the 2021 Gold American Eagle Type 2 Proof that launched from the Mint earlier this summer. The reverse motif of the gold 2021 American Liberty coin was designed by Richard Masters, a member of the Mint's Artistic Infusion Program. It was sculpted by Phebe Hemphill, another Mint Medallic Artist.

Masters’ American eagle is shown having an intense gaze and is depicted in intricate detail, making it a visually impactful image. The standard reverse inscriptions for this coin are also included: “UNITED STATES OF AMERICA” on the outer bottom edge, the coin's "1 OZ." ".9999 FINE GOLD" precious metal contents and its "$100" face value. The motto found on the Great Seal of the United States, "E PLURIBUS UNUM," appears centered in the bottom portion of the coin's reverse, with the "W" mint mark, indicating production at New York's West Point Mint, just below. The initials of the image's designer appear at the throat of the mighty bird, while the sculptor's initials appear just below its beak.

The Mint will impose a 12,500-coin mintage limit on the 2021 American Liberty High Relief Proof Gold Coin, a 12,500 product limit, and a household order limit of 1.

The inaugural installment of the American Liberty gold coin was released for public investment on July 30, 2015. This first-ever issue of the coin and medal series was struck in high relief and of 24-karat gold.

The design of this original issue was “strongly influenced” by the 11-member, Congressionally established Citizens Coinage Advisory Committee, which was formed in 2003 “to advise the Secretary of the Treasury on the themes and designs of all U.S. coins and medals,” the Mint describes. The U.S. Commission of Fine Arts, an independent body authorized by Congress nearly 100 years prior, in 1910, also weighed in on the imagery of this first American Liberty gold coin.

The resulting designs on the inaugural issue feature striking manifestations of the program’s aesthetic mission to represent Liberty and the American eagle symbol in thoroughly modern fashions.

On its reverse, Lady Liberty is pictured gazing confidently out into the distance, steadfastly holding an American flag on a pole in her left hand and carrying a flaming torch in her right. She dons an elegantly draped, sleeveless gown that is cinched with a rope at her waist, while a crown of what can only be presumed to be made of the typical foliage representative of the United States’ ideals – laurel and oak – sits atop her head. The usual inscriptions appear on the coin's obverse, including "LIBERTY" lining the top left portion of the coin's edge, the nation’s motto, “IN GOD WE TRUST,” appearing in two-word chunks on either side of Liberty, and the coin’s strike year. The image was designed by U.S. Mint Artistic Infusion Program member Justin Kunz and sculpted by U.S. Mint Medallic Artist Phebe Hemphill. Both artists’ initials also appear on the front side of the coin.

As with all coins and medals in the program, the coin's reverse bears the image of an American bald eagle. Here, the national bird is shown in flight, wings outstretched to either side and clutching an olive branch in its talons as it soars through the air. “UNITED STATES OF AMERICA” appears along the top curve of the coin’s reverse, while the piece’s face value of “ONE HUNDRED DOLLARS” lines the bottom curve. Just above the coin’s face value appear its “1 OZ.” “.9999 FINE GOLD” precious metal contents. In the bottom left quadrant of the coin's backside, just under the eagle’s chest, appears the motto found on the Great Seal of the United States, “E PLURIBUS UNUM,” which means, “Out of many, one.” The “W” mint mark, indicating production at the West Point Mint in New York, sits just slightly above that, directly below the bird’s beak. The initials of the reverse image’s designer, Paul C. Balan, and the image’s sculptor, Don Everhart, also appear.

While the elements of both the coin’s obverse and reverse designs don’t strike one as particularly divergent from coin designs of the past – at least when considered independently – overall, the motifs appear almost inexplicably dynamic, both capturing a sense of life and modernism representative of today’s America.

While there was no gold piece struck under the program in 2016, production resumed in 2017 with a gold coin honoring the 225th anniversary of the establishment of the United States Mint.

For the first time in the long history of U.S. coinage, Lady Liberty appears as an African American woman. This image of Liberty is a significant and long-overdue step forward in the legacy of this country’s visual symbolism and the evolution of the ideals we, as a nation, portend to uphold, yet, for so long have (and still) struggled to realize.

Additionally, the 2017 iteration of the American Liberty program’s gold coin is the first time the U.S. Mint ever struck a high relief coin with a proof finish.

On the obverse of this 2017 gold coin installment, Liberty is shown wearing a crown made of five-point stars, her hair tied loosely into a bun at the back of her head. The word “LIBERTY” is struck in all-caps letters and stretched across the top edge of the coin, while the years 1792 – the year the U.S. Mint was established – and 2017 – the 225th anniversary of that inaugural year – flank either side of Liberty’s portrait. The initials of the design’s creators – again, designer Justin Kunz and sculptor Phebe Hemphill – appear at the tops of each of Liberty’s shoulders.

Again, the 2017 coin's reverse features a brilliantly dynamic image of an American bald eagle soaring through the air. The bird's wings are shown in striking detail, each feather carefully outlined and textured, breathing an abundance of life into the image. The same inscriptions as the first-year installment of the coin appear on the reverse of this issue, as well – “UNITED STATES OF AMERICA,” “E PLURIBUS UNUM,” the coin’s one-hundred-dollar face value, its precious metal contents, and the “W” mint mark. The initials of the image’s designer – Chris Costello, of the Mint’s Artistic Infusion Program – and the image’s sculptor – Michael Gaudioso, a Mint Medallic Artist – are also struck on the reverse.

Another exciting and unique feature of this 2017 issue is the inscriptions struck on the face of the coin's edges, which read "225th ANNIVERSARY.” U.S. Mint coins are typically struck with reeded edges, making this gold coin, with its smooth, inscribed outer rims, all the more appealing.

For its 2018 installment the following year, the Mint released a “complimentary” version of the 2017 anniversary coin in a fractional one-tenth-ounce size. This follow-up issue carries a nominal $10 face value compared to the previous year's $100 but features the same stunning obverse and reverse designs as its full-ounce predecessor.

The 2019 issue of the American Liberty gold coin lineup features a striking profile portrait of Lady Liberty with loose strands of hair flowing in the wind and 13 rays of sun “emanating” from her crown, which, as the Mint points out, symbolize “the free and creative spirit of America’s people.” Thirteen five-point stars line the left edge of the coin’s obverse, while the usual inscriptions of “LIBERTY” and “IN GOD WE TRUST” line the other edges. As with the program’s other gold coin issues to date, the 2019 coin features the strike year on its obverse, as well as the initials of the artists responsible for the design. Artistic Infusion Program member Richard Masters designed the obverse motif, and Mint Medallic Artist Joseph Menna sculpted it.

The "W" mint mark is shown on the obverse of the 2019 gold coin versus on its reverse, as in years past.

The eagle on the backside of the 2019 coin is shown in descending flight, wings outstretched to either side, and talons activated for landing. The bird fixes a piercing gaze on its viewers, adding to the life-like feel of the motif. The usual inscriptions appear on this coin’s reverse – “UNITED STATES OF AMERICA,” the coin’s weight and gold contents, its “$100” face value, and “E PLURIBUS UNUM” – as well as the initials of Donna Weaver, Mint Artistic Infusion Program member, who designed the imagery, and Medallic Artist Michael Gaudioso, who sculpted it.