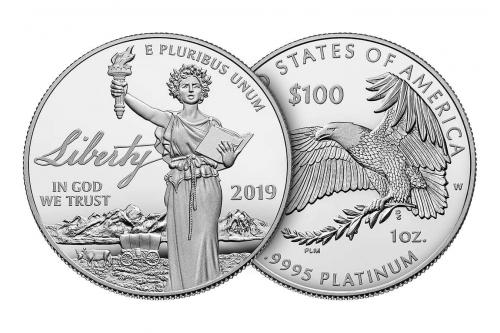 Continuing our new year kick-off of coin releases, we’re happy to announce that current-year issues of the U.S. Mint’s Proof Platinum American Eagle will are available for purchase! The 2019 issue of the Proof Platinum Eagle is the second installment in the Mint’s special three-year series, “Preamble to the Declaration of Independence.”

In 2018, 21 years after the Proof Platinum Eagle was initially released, the U.S. Mint kicked-off this special three-year design series, which, in addition to diversifying the coin’s artistic legacy, spotlights the three “unalienable Rights” outlined in the United States Declaration of Independence: Life, Liberty, and Happiness. The 2018 Proof Platinum Eagle epitomized the first of the three – Life – with its depiction of a young Lady Liberty teaching a child to sow seeds in a sprawling American field. This year, with its pictorial nods to freedom, exploration, and the American rule of law, the 2019 “Preamble” Eagle will exemplify the second unalienable Right: Liberty. 2020 Eagles will embody the third: Happiness.

In 1997, the Mint added a platinum version of the American Eagle to its Proof series, which to that point, had only included gold and silver issues. In 2018, a palladium version was also added.

What does the 2019 Proof Platinum American Eagle look and feel like?

The obverse of the 2019 Proof Platinum American Eagle is a brilliant display of American bravery and idealism. The coin’s main focal points are the scripted word, “Liberty,” and an image of Lady Liberty proudly raising a torch into the air with her right hand – “an emblem of the guiding light that liberty provides,” as the U.S. Mint puts it – and cradling an open book, representing the rule of law in America, in her left arm.

Behind Lady Liberty is the image of a covered wagon traversing the “majestic” mountains of the American West, a scene that is, according to the Mint, emblematic of the pioneering "American spirit to explore new territory and the freedom to pursue new landscapes, ideas, and ways of life.” Artistic Infusion Program (AIP) artist, Justin Kunz, created each obverse design in the series.

All three coins in the series will boast the same reverse design. An American eagle, descending in flight, grasps an olive branch in its talons as its magnificent wings stretch to each side. “UNITED STATES OF AMERICA” lines the top rim of the reverse while the coin’s precious metal contents, “.9995 PLATINUM,” are struck along the bottom. The coin’s face value of $100, troy weight of “1oz.” and “W” mintmark are also all included, along with the initials of designer Patricia Lucas-Morris. Like obverse designer Justin Kunz, Lucas-Morris is also part of the Artistic Infusion Program. 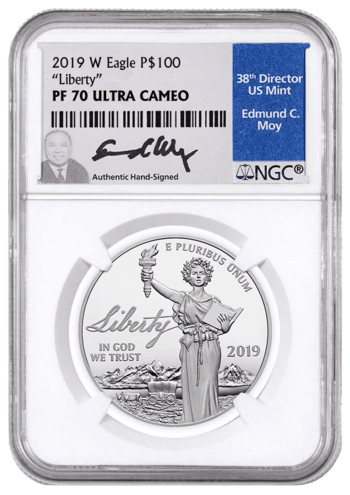 Why should I buy my 2019 Proof Platinum Eagle through the United States Gold Bureau?

The U.S. Gold Bureau is committed to ensuring that our clients receive only the highest quality pieces when they purchase through us. Our Proof coin inventory includes only top-level PF70 coins, as graded by the Numismatic Guaranty Corporation (NGC) or the Professional Coin Grading Service (PCGS), the two premiere grading organizations in the United States.

Additionally, all Proof coins purchased through the U.S. Gold Bureau are accompanied by a one-of-a-kind certification label hand-signed by the 38th Director of the United States Mint, Edmund C. Moy. After serving as Special Assistant to President George W. Bush for over five years, Moy was appointed as Director of the U.S. Mint, a position he served in for five years. In addition to overseeing the sale of more than $1 billion worth of numismatic collectibles by the Mint in his first year as leader, Director Moy steered the organization through the 2008 financial crisis and also facilitated the launch of three new significant coin programs for the Mint: the 50 State Quarter program, the Presidential $1 Coin, and the National Parks Quarter program.

Pieces accompanied by an Ed C. Moy certification label have made headlines thanks to their popularity and the often-impressive premiums they afford investors. Hand-signed Moy certificates are only available to U.S. Gold Bureau clients and offer a unique value-add to any precious metal portfolio.

When can I buy my 2019 Proof Platinum Eagle from the U.S. Gold Bureau?

The U.S. Mint is releasing this year’s “Preamble” Platinum Eagle on Thursday, January 31st, and clients can get their hands on one of these current year issues from the U.S. Gold Bureau on February 11th. All Proof Platinum Eagles offered by the U.S. Gold Bureau will come pre-graded with the highest PF70 score from NGC or PCGS, saving our clients the time and resources needed to do this on their own.

Give our team of Precious Metals Experts a call today to learn more about this unique investment piece or purchase the 2019 1 oz Platinum American Eagle here to be the first to know when U.S. Gold Bureau “Preamble” Proof-70s are available!

Posted in: Investing, Platinum
By United States Gold Bureau
Did you like this post?
0
0
Search The Blog
Categories
Recent Posts