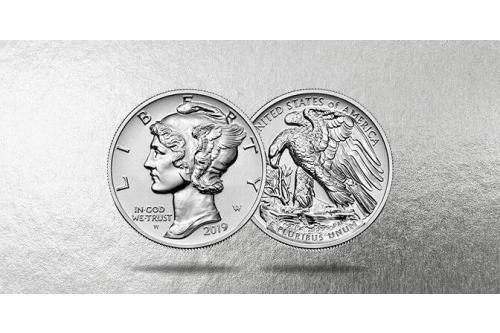 Not only is the 2019 run anticipated to carry forth the impressive fanfare and high demand of previous Palladium Eagle Proof series issues, but it also boasts a few exciting and unique characteristics of its own.

As in years past, the 2019 Palladium American Eagle will bear the "Winged Liberty" image designed by Adolph A. Weinman for the 1916-1945 Mercury Dime. What's unique about this year's Palladium Eagle issue is its Reverse Proof finish. For 2017 the palladium eagle was struck in a bullion finish and 2018, Weinman's design was struck in the standard high-relief style, which produces an impressive level of detail and stunning overall effect in its own right. This new Reverse Proof Palladium Eagle iteration, however, brings a unique and refreshing aesthetic appeal to Weinman's historical image.


The appeal of the Palladium American Eagle


Since its initial release in 2017, the Palladium American Eagle Proof has been lauded by investors and coveted by collectors far and wide.

Congress authorized the series in 2010 under the so-called American Eagle Palladium Bullion Coin Act of 2010 and the Mint released the coin for the first time seven years later on September 25th, 2017. The Palladium American Eagle is America’s official palladium bullion coin and is the “first and only official investment-grade palladium coins from the United States Government,” per the U.S. Mint.


From the onset, the series has been marketed to investors but has also enjoyed widespread appeal amongst numismatists and precious metals enthusiasts alike. The first installment in 2017 was met with massive fanfare, selling out rapidly at both the Mint and secondary dealer levels. For its sophomore run in 2018, the coin was again highly anticipated and sold out from the Mint within five minutes of its debut. The coin continues to experience remarkably high levels of demand in investment spheres thanks, in part, to low mintage figures for both 2017 and 2018 issues.

The United States Gold Bureau offers an American Eagle Proof coin inventory made up almost exclusively of PF70 pieces, and each of our Palladium Eagles is accompanied by a certification label hand-signed by former Director of the U.S. Mint, Ed C. Moy.

In addition to a distinguished career in the private sector, Moy served in the U.S. government for ten years under President George W. Bush, first as Special Assistant to the President for Presidential Personnel, then on the Department of Homeland Security transition team, and finally as the 38th Director of the U.S. Mint. Ed Moy Signature Series investment pieces have thus far proven to be extremely popular, demanding impressive premiums at auction and enjoying widespread appeal across investment markets. Learn more about this unique value-add offered exclusively to U.S. Gold Bureau clients Palladium Eagle coins.


As with both the 2017 and 2018 Palladium Eagles, the 2019 issue will again feature the impeccable artistry of German-born American sculptor, Adolph A. Weinman. Made famous by the 1916 Mercury Dime, the Palladium Eagle Proof series has, as dictated by the 2010 American Eagle Palladium Bullion Coin Act, bore Weinman's "Winged Liberty" portrait design. In Weinman's portrait, a young Lady Liberty dons the traditional Greek and eventually Roman-style pileus – or Liberty – cap with wings on each side, which ultimately earned the coin its colloquial nomenclature, “Mercury Dime.” While the American public associated this 1916 Liberty with the Roman God, Mercury, who wore a similar winged cap to the pileus Liberty is shown wearing, Weinman didn’t seem to intend the likeness. To the contrary, although not necessarily directly, the designer wrote that, to him, the cap symbolized “liberty of thought” rather than any ties to Roman gods.

Accompanying Weinman’s “Winged Liberty” on the obverse of the Palladium Eagle are the words, “L I B E R T Y,” lining the coin’s top edge, “IN GOD WE TRUST” in the bottom left corner, and the “W” mintmark sitting just below, indicating mintage at the West Point Mint. In the bottom right corn are the intertwined initials of Adolph Weinman, along with “2019” near the bottom rim.

The reverse of the 2019 Palladium Eagle Proof also appears as it has in years past, featuring a high-relief version of the 1907 American Institute of Architects Gold Medal reverse design, also designed by Weinman. The imagery shows a standing American eagle perched atop a rocky ledge, wings partially stretched backward, clutching what is presumed to be an olive branch in its beak. Inscriptions on this side of the coin include “UNITED STATES OF AMERICA” along the top, “E PLURIBUS UNUM” along the bottom, “1 OZ Pd .9995 FINE” just above the national motto and the coin’s $25 legal tender face value to the left.

Aside from its present-day reputation for striking such beautiful investment pieces, the West Point Mint has a history of precious metals storage. Beginning in 1937 when it was built, the facility operated as the “West Point Bullion Depository” and was primarily known for precious metals – especially silver – storage. At one point, the location housed the largest concentration of silver of any U.S. Mint facility and as such, earned the nickname, “The Fort Knox of Silver.”

The West Point outfit became an official branch of the United States Mint on the last day of March 1988 and was listed later that year on the National Register of Historic Places.

The minting process, just as with standard Proofs, begins with high-quality burnished – or exceedingly polished – coin blanks. From there, specialized Reverse Proof dies are prepared. While the overall production process for Reverse Proofs follows the same general steps as standard Proof coins, it is the coin die preparation steps that set this technique apart. Instead of having a frosted effect applied in totality to its surface, the die first receives an overall extremely high-sheen finish. Next, the frosting effect is applied to the field portions of the die design. While this step used to be carried out by an acidic solution, today, a computerized laser frosting machine completes the task. When the die is ready and the burnished blank is finally struck, a coin with frosted fields and shiny devices is produced.

The United States Gold Bureau clients will be able to add one of these striking 2019 Palladium American Eagle Reverse Proof beauties to their investment portfolios releasing soon.  Ready to learn more today? Give our team of Precious Metals Specialists a call today (800-775-3504)!