Who is on the Dime? 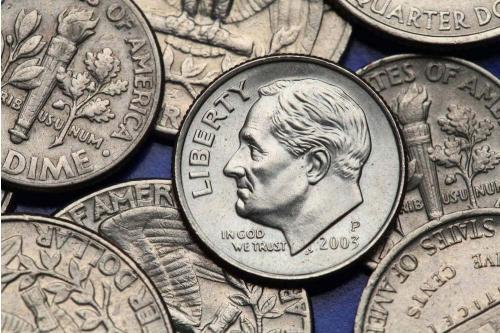 Who is on the Dime?

If you reach into your pocket, piggy bank or wherever your loose change seems to collect these days, chances are you’ll pull out at least one dime. The dime is so ordinary in today’s world that it’s easy for it to be overlooked or even taken for granted. Despite this seemingly mundane role, our country’s 10-cent piece is an impressive artifact of the American story.

Not only is it steeped in numismatic history, but it's also highly charged with national pride and prestige, reminding us, at each stage of its life, of the lasting legacy of our great country. While the story of the U.S. dime may often be reserved for history books, one thing that remains top of mind for curious investors is the question of who is on the dime.

Who is currently on the U.S. dime?

Today, the image of America’s 32nd president, Franklin Delano Roosevelt, graces the face of the dime. Often regarded as one of the U.S.’s greatest presidents, Roosevelt made his mark not only on American history but also on world history in the early 20th century.

Serving an unprecedented four terms, FDR guided the U.S. through the Great Depression and World War II, solidifying his reputation as one of the greatest leaders our country has known. Shortly after his death in 1945, lawmakers proposed to replace the famed Mercury dime design with Roosevelt’s image, in honor of the late president's significant contributions. In addition to his geopolitical legacy, FDR was also chosen for his involvement in founding the National Foundation for Infantile Paralysis, which later became the March of Dimes.

Upon Congress’s approval of the redesign legislation, the Mint was left with limited time to produce the new coin. As a result, Chief Engraver John R. Sinnock was tasked with the job, making the Roosevelt dime the first regular-issue coin in more than 40 years to be designed in-house by a Mint employee.

The newly fashioned Roosevelt dime was released on January 30, 1946, what would have been the late president’s 64th birthday, and is still produced and circulated today. The Roosevelt dime features FDR’s profile portrait on its obverse, and on the reverse, depicts a torch representing liberty, an olive branch symbolizing peace, and an oak branch epitomizing strength. While the redesign was motivated by honor for a great president, the implementation was not without controversy.

As part of his design, Sinnock included his initials, “JS,” which, in the midst of the widespread anti-Communist sentiment, were taken to represent the then-Soviet leader, Joseph Stalin. The rumors suggested that the two-letter engraving was placed on the coins by a Soviet agent, which the Mint swiftly and publicly rejected. Additionally, speculation about the true origins of Roosevelt’s image began to swirl.

While Sinnock stated that he used imagery previously created by him for the Roosevelt medal that he also designed, some claimed that the Chief Engraver borrowed the presidential depiction from African American sculptor Selma Burke's bas-relief of FDR. The Roosevelt dime has been minted annually since its initial 1946 release.

The Philadelphia, Denver and San Francisco mints produced circulating versions through 1955, after which, San Francisco produced Proofs only. In 1996, to commemorate the Roosevelt dime's 50th anniversary, the West Point mint produced a limited run.

Who was on the dime before Roosevelt?

Since its initial release in 1796, the dime has been cast in six different designs, including the Roosevelt iteration. The initial design was the currency-wide Draped Bust on the obverse and Small Eagle on the reverse. The same obverse-reverse combo, which was created by then-Chief Engraver Robert Scot, was struck on all circulating coins of the time.

Since its initial release in 1796, the dime has been cast in six different designs, including the Roosevelt iteration. The initial design was the currency-wide Draped Bust on the obverse and Small Eagle on the reverse. The same obverse-reverse combo, which was created by then-Chief Engraver Robert Scot, was struck on all circulating coins of the time.

The Coinage Act of 1792, which established the American monetary system we know today, did not require the dime to bear its denomination. As a result, the first dimes were struck without indication of their value. In 1809, the Capped Bust design began its run and lasted through 1837.

The Capped Bust design was altered in some form or fashion multiple times, resulting in 123 known varieties. One significant shift during the Capped Bust tenure was the move from “Large Type” to “Small Type” dimes. Before 1828, dimes were struck without a restraining collar, giving the appearance of broader surface areas. In 1828, Mint Chief Engraver, William Kneass, introduced a new production method that automated the process of adding reeds to a coin’s edge and standardized the dime’s diameter. The method was known as “close collar method” and resulted in the “Small Type” dimes.

Next came the Seated Liberty dimes from 1837 through 1891. Soon-to-be Chief Engraver, Christian Gobrecht, was responsible for this iteration, which featured a Lady Liberty reminiscent of Britannia struck on English coinage. On this third reiteration, Liberty is shown sitting elegantly atop a rock holding a staff and propping up a "Liberty" inscribed shield. The reverse moved from bearing the image an eagle, as with the two previous designs, to merely displaying the coin’s denomination. Several minor alterations to the Seated Liberty dime ensued before its final issuance in 1891.

After the Barber dime’s 24-year run, the Winged Liberty Head – or more colloquially, the Mercury dime – began production. From 1916 through 1945, Lady Liberty was struck on the obverse of the dime wearing a Phrygian – or Liberty – cap, which, according to designer Adolph A. Weinman, incorrectly associated her with the Roman god, Mercury, who was depicted as donning a similar winged cap, plus winged shoes. Rounding out the six-version design spectrum is the Roosevelt design we see today, a prideful iteration that continues to remind us to this day of one of the country's greatest leaders.