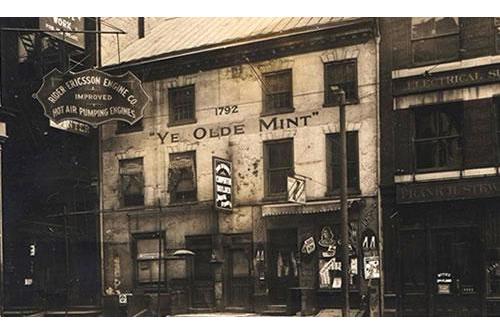 The West Point Mint was constructed in 1937, but at that time was known as the West Point Bullion Depository. Its primary function from 1937 until 1973 was to store silver bullion and other valuable items for the federal government. It wasn’t until 1973 that it began minting coins.

The first coins minted in West Point were Lincoln cents that had no mint mark, which were minted from 1973 to 1986. 1977 through 1979 brought the minting of quarters of both the Bicentennial and Washington varieties and $20 billion worth of gold being stored within its walls. It wasn’t until 1988 that it was officially named a branch of the United States Mint. Coins minted here bear the “W” mint mark.

The Mint in Philadelphia mints coins (up to a million in thirty minutes), medals for the military, and engraves dies and strikers—the only facility that does so in the United States. Although circulated coins minted here before 1980 bore no mint mark, all coins except for the penny has since bore the “P” mint mark.

The largest producer of coins in the world, the Denver Mint Branch first opened in 1897 and minted its first coins in 1906. In the first year, 167 million coins were minted and the Denver Mint quickly grew from there. Coins minted in Denver bear the “D” mint mark, previously used by the Dahlonega Mint in Georgia.

Opened in response to the California Gold Rush, the San Francisco Mint was opened in 1854 and has since been located in three different facilities, with its most recent building having been opened in 1937. Since then San Francisco has seen a suspension of minting circulating coinage from 1955 through 1968, a resumption for supplemental coinage until 1974, and the coinage of almost exclusively proof coinage since then. The Susan B. Anthony dollar was minted here from 1979-1981 and bore the “S” mint mark.