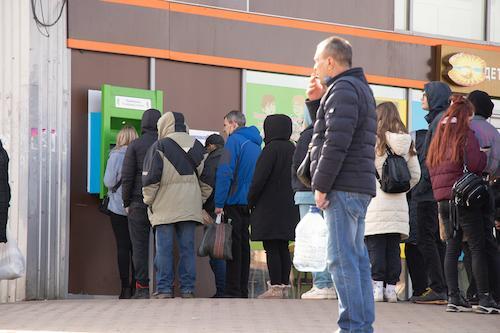 Photo: Russian invasion of Ukraine had people lining up to withdraw cash from ATMs. Withdrawals limited at a maximum 10,000 roubles or $129 per day. - TASS news agency

Spot gold slipped on Thursday as investors continued to assess the crisis in Ukraine, after Russian forces attacked the country on the orders of President Vladimir Putin.

Gold last traded at $1,897.76 per troy ounce, down 0.5% on the previous day. Earlier in the morning the precious metal was trading at $1,968.01 per ounce, up 3.17% and the highest since late 2020, as investors piled into safe-haven assets and equity markets globally tumbled into the red. Oil and soft commodity prices were sharply higher. Brent crude surpassed $100 for the first time since 2014.

Russia is a top producer of palladium and platinum, and the world’s third-largest producer of gold.

President Joe Biden said in an afternoon press conference that the U.S. will introduce another wave of sanctions against Russia that would limit its ability to do business in dollars, euros, pounds and yen, in an effort to isolate Moscow from the global economy.