Top FIVE Signs it is Time to Sell Your Gold 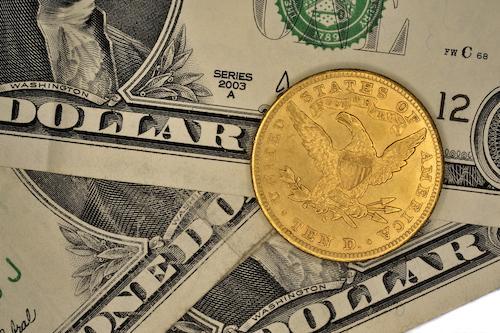 Top FIVE Signs it is Time to Sell Your Gold

Are you holding onto gold?  Maybe you have recently inherited a collection of gold coins, or gained interest in diversifying your wealth into precious metals, and if so, do you need help determining exactly when the right time is to sell?  Do you even know what to look for to maximize your payout?

Before you start thinking about where to sell your gold, you need to decide whether it’s the best time to sell your gold.  No one can be sure how the price of gold will move- the price fluctuates regularly depending on economic conditions and investor demand.  But there are several indicators you can identify to help determine if your gold has the most value now.

In this post, we’ll be discussing FIVE Signs that will help ensure that you will receive the highest payout for your gold.


ONE: High Uncertainty in the US and Global Economy


Gold is often revered as the ultimate store of value in times of uncertainty with the global and US economy.  Predicting the next big moment of uncertainty could potentially yield significant gains on gold purchases.

In recent history, we have witnessed two particularly high spikes in the value of gold.  The first between 2009 and 2011, at the height of the financial crisis and the second surrounding the Brexit vote of 2016 - both times of extreme economic uncertainty. In these moments of economic downturn, investors flocked to gold, and in the process, increased demand which in turn, increased prices and ultimately increased the value for gold.

Currently, amidst some economic uncertainty amidst China and the US as well as global growth slowdown, stock markets have seen their prices peak and begin to stagnate or drop.  These events, though not great for the world economy, tend to all be very good things for the value of gold. It may not be a perfect time, but it is definitely something worth keeping an eye on.  There are more indicators below to help aid in pinpointing the right moment to cash in on your gold.


A common misconception is that gold performs poorly when interest rates rise as gold pays no dividend or interest.  However, the key is what real interest rate are doing.  That is the nominal interest rate minus the rate of inflation.

We tend to hear experts say that gold should fall when interest rates rise.  We are often told, “Higher interest rates make gold a less attractive investment because it pays no interest.”  When in reality, gold is more likely to go up than down during Fed tax hikes.  Over a Thirty-year period, gold has increased across all four time periods, as illustrated below.

In fact, gold has usually risen alongside interest rates historically as well- also illustrated below.

Currently, there is very little reward in the form of interest for keeping your money in the bank.  Real interest rates are actually negative in many countries around the world.

The historical graph below shows how gold performs when real interest rates are negative.

You can see how gold continued to rise throughout the 1970s until real interest rates finally turned positive again.  And in today’s market, central banks find themselves in a worse position than in 1980.  It will be very difficult to raise interest rates sufficiently without destroying their economies in the process.

Recently, the Federal Reserve has begun to halt their interest rate rises much earlier than originally planned, even though now, real interest rates are currently at just under 2 percent, though the Fed has backed off of raising them for the moment.

As real interest rates stay near or below zero, this may be a very good indicator that your gold could be at its best value and a decent time to sell.


The Dow- Gold ratio is the Dow Jones Industrial Average (a measure of the US stock market) divided by the price of gold.  Simply, the Dow Gold ratio tells us how many units of the DJIA you could buy for one ounce of gold. It is one of the oldest and most-watched indices in the world.  The stock market reached historic heights in 1929, 1966 and 1999 as the Dow- Gold ratio did the same.


You more than likely know a few people in your circle of friends and family who own gold or gold-related investments, and when more and more people from those circles begin to talk about gold- it is probably time to look toward moving your gold.

When gold’s value rises, it will most likely become a major topic of discussion amongst major news networks and mainstream media, between coworkers around water coolers, and amongst friends at dinner parties and other social gatherings.  When that day comes, gold’s value is likely reaching a top and the time to cash out is imminent.


FIVE:  Show Me the Money

The final sign that it is time to part from your gold just might be the simplest one- the Best time to sell your gold is when you either need cash or don’t need or want the gold any longer.  Gold that you have sitting at home, or in a safety deposit box, has a value, but it is also subject to the whims and variances of the market.

Until you actually sell your gold, you haven’t realized its true value.

In fact, just holding onto your gold can be costing you money in the long run.  Storing gold itself can cost the holder fees like in the case of storing a the Texas Bullion Depository. Fees can add up over time.  If you sell that gold today, you can get cash for it that you can spend of invest elsewhere for a potentially higher return.

When looking at the Dow Jones Industrial versus gold spot pricing over the same amount of time- the DJI has increased by nearly TEN times versus the spot price of gold which has increased as well, but only FIVE times over the same period of time while simultaneously being subjected to much higher variance.

If you aren’t interested in investing in stocks, simply having cash on hand for unexpected expenses or to buy a home can also be a chance to gain more non-monetary assets and a good way of diversifying your wealth.

The bottom line is that you should sell your gold when you have a plan for the cash you’ll receive or for when you simply need the cash value of your gold.