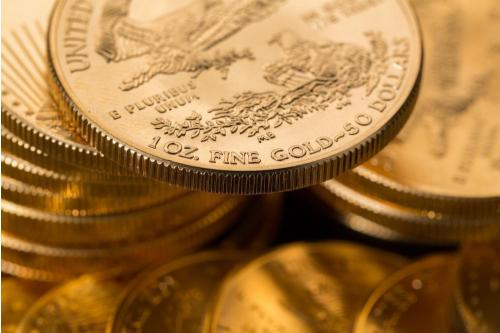 Our writer, Lawrie Williams, travelled to the Mines & Money conference in London where parallels were drawn between the call to return to the gold standard and the Gray Wolf, which re-released into Yellowstone has improved the overall ecosystem of the park. Can the gold standard do the same to our economy?

Last week I was privileged to attend Grant Williams’ presentation at the Mines & Money meeting in London titled ‘Cry Wolf’. In my view Grant (no relation), who publishes the Things that make you go hmm..newsletter is one of the most astute financial analysts out there and I would encourage anyone attending a conference at which he is speaking to go and listen to him.

Cry Wolf, which was the subject of one of his newsletters back in the northern Summer, and is now a polished presentation he has no doubt given at other conferences, is effectively a plea for the return of the Gold Standard which admittedly has both upsides and downsides, but overall has presided over huge periods of global prosperity when it was in existence. There is huge resistance to such a return from the financial sector and from politicians who would have most to lose from its re-imposition in terms of it reining in financial indiscipline which hugely besets the global economy at the present time. Williams doesn’t see the return of some kind of gold standard as being likely in the short term, but long term he sees it as virtually inevitable as the world sinks deeper and deeper into a debt-mired global financial crisis.

The premise of Williams’ presentation was to liken the opposition to a gold standard return to that which preceded the re-introduction of the Gray Wolf (the apex predator) to a limited area of the Yellowstone National Park. The protesters succeeded in limiting this re-introduction to 31 animals, but returning even such a small number to the park has resulted in enormous restorative benefits to the area in which they were released - many of which were totally unanticipated. These not only included keeping the numbers of deer and elk in check - perhaps the original purpose - but also have seen a whole host of other resultant benefits which have hugely improved the whole ecosystem in the parts of the park where the gray wolves roam - not only in terms of flora and fauna regeneration, but also in repairing the river systems. This may all seem unlikely but has been well documented by a Yellowstone Park website (See: Wolf Reintroduction Changes Ecosystem - My Yellowstone Park)

Inasmuch as the gray wolf is effectively the Yellowstone’s apex predator, Williams gives this apex position to gold in the financial markets as perhaps the least risky financial instrument, but primarily as a bringer of discipline into the financial ecosystem, as classified in John Exter’s inverse pyramid - shown below in an updated version from Wikipedia: 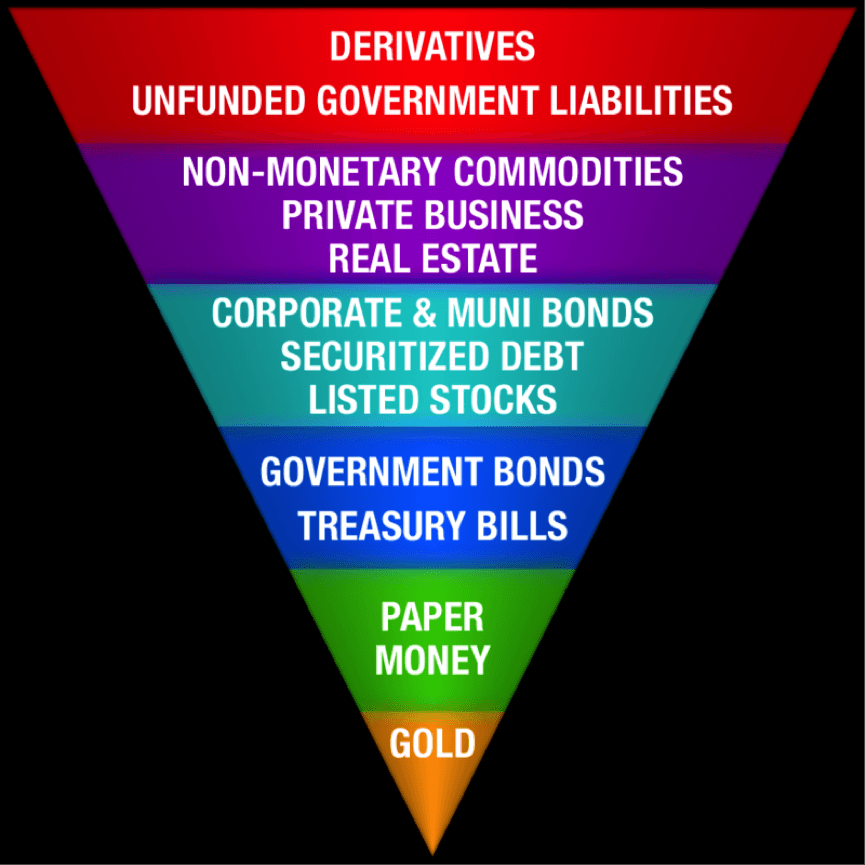 Wikipedia describes this version of Exter’s pyramid thus: ”The organization of asset classes in terms of risk and size. In Exter's scheme, gold forms the small base of most reliablevalue, and asset classes on progressively higher levels are more risky. The larger size of asset classes at higher levels is representative of the higher total worldwide notional value of those assets. While Exter's original pyramid placed Third World debtat the top, today derivatives hold this dubious honor.”

Williams pointed out in his presentation that the global economy has now been based wholly on fiat currencies for many years now and that history has shown that fiat currencies all collapse - eventually! He sees the reintroduction of some form of gold standard (however it happens) as returning to the imposition of an ‘apex financial predator’. In other words, it is one that keeps bankers in check, reins in wanton credit creation and allows surprising parts of the financial ecosystem to flourish. But he also warns that the opposition by those with the power and the money will ensure such a reintroduction will be far from easy and almost certainly would need an enormous financial crisis/meltdown to help bring it about.

Be careful what you wish for!

In his view both China and Russia, which have been dumping U.S. Treasuries, seemingly in favor of gold, realize this fact and anticipate that gold will play a major role in any financial reset ahead. Other central banks seem to be beginning to understand this too and the first signs are there that some of these may just be beginning to rebuild their gold reserves.

How long before this all starts filtering through to the gold price and to prices of other precious metals, notably silver which has really been in the doldrums in the second half of the current year? Perhaps not too long now, although it may initially need an overt change in U.S. Fed policy to open the floodgates. This could well happen sooner rather than later should equities turn what is currently seen as a recent correction into something of a rout. The recovery in equities prices over the past few days since the G20 meeting in Buenos Aires may put a temporary end to such speculation but, in our view, there are inherent weaknesses in the U.S. economic revival which may just force the Fed’s hand. For example, in its most recent statements, the Fed seems to be intimating that it may need to reduce the frequency of rate increases in the future, although the long-predicted December rise still looks set to go ahead.

As Williams comments it would require a true financial crisis - in other words perhaps the mother of all market crashes - to bring about the kind of a change in thinking that might initiate a genuine solution to the financial ills that afflict us all - notably a return to some kind of gold standard, perhaps in the form of a currency/asset basket along the lines of the IMF’s Special Drawing Right, but including gold in the asset mix . Perhaps wishful thinking but a solution that looks like it may be becoming increasingly attractive as the debt mountains pile up.

Posted in: Investing, Gold
By Lawrie Williams
More from this author
Did you like this post?
0
0
Search The Blog
Categories
Recent Posts