Texas Bullion Depository to be Headquartered in City of Leander 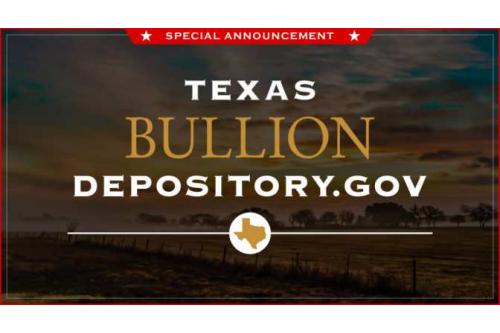 Texas Bullion Depository to be Headquartered in City of Leander

November 3, 2017 (AUSTIN) — Texas Comptroller Glenn Hegar announced today that the city of Leander will be the future home of the Texas Bullion Depository.

Construction on a multi-acre site is expected to begin in early 2018. The site was selected by Austin-based Lone Star Tangible Assets (LSTA), the vendor selected by the Comptroller’s office to build and operate the nation’s first state-administered gold bullion depository. LSTA is an industry leader in the precious metals business and was selected as the operator for the depository based on its innovative solutions and their experience in the precious metals business.

“I am pleased that LSTA and the city of Leander have reached an agreement to make this historic facility a reality for the people of Texas,” Hegar said. “The Texas Bullion Depository is another example of the innovative and entrepreneurial spirit Texas fosters. This state-of-the-art facility will provide tremendous benefits to the citizens of Leander and will give Texans a secure facility right here in the Lone Star State where their gold and precious metals will be kept safe and close at hand.”

The new facility will include space for highly secure precious metals storage and will incorporate the latest technology in security systems, including advanced perimeter defense and high-definition security cameras. The exact location of the site is being withheld for security reasons.

“I’m truly excited to build Lone Star Tangible Assets’ new headquarters and the Texas Bullion Depository in Leander,” said Matt Ferris, chairman of Lone Star Tangible Assets. “The representatives and city officials of Leander, including Mayor Chris Fielder and Chief of Police Greg Minton, have been extremely helpful and supportive during our research and evaluation periods. In addition, Mark Willis from the Leander Economic Development Corporation worked tremendously hard to craft an incentives package that made sense for both Lone Star Tangible Assets and the city of Leander

Tom Smelker, director of Treasury Operations at the Comptroller’s office, was named as the depository’s administrator earlier this year. Although the depository will be located in Texas, it will provide services nationwide in 2018, with international services to be offered in future phases. LSTA expects the brand-new, purpose-built depository facility to be completed late in 2018 or early 2019.

“We are thrilled to have Lone Star Tangible Assets and the Texas Bullion Depository in Leander,” Leander Mayor Christopher Fielder said. “As one of the safest and fastest-growing communities in the nation, I can't imagine a better place for companies in the precious metals industry to operate. We believe Leander is a growing destination for business, and I am proud to have us represent the state of Texas in this joint enterprise.”

Ret. Col. Paul Hamilton, a 37-year veteran of the U.S. Air Force, leads operational security design efforts for LSTA and is responsible for the design and implementation of procedural and physical security for the Texas Bullion Depository and LSTA headquarters facility. Hamilton held several commands at Air Force installations with some of the nation’s highest security levels. His previous projects include coordinating manning requirements for the 14th Air Force and the Joint Space Operation Center, relocating a USAF Regional Headquarters operation and serving on the initial Site Activation Committee for Buckley Air Force Base.

Due to the unique nature of the facility, the city of Leander has authorized LSTA to build its own on-site firearms range and tactical training area.

“Lone Star Tangible Assets has been achieving double-digit growth for years, growing from less than 15 employees in 2012 to more than 100 employees today,” said John Hutmacher, CEO of LSTA. “We intend to begin hiring more staff members as we move in and settle into our new facility. Our staff is excited about the move to Leander and many are planning to relocate to the area to join the local community.”

“The decision by Texas Bullion Depository ranks as one of our most exciting developments to date,” said Kent Cagle, Leander city manager. “With a new hospital and college campus also on the horizon, this adds another dimension to our expanding local economy.”

Added Mark Willis, Leander’s economic development director: “The city’s agreement with Lone Star Tangible Assets will bring sustainable jobs to our workforce and encourage other industries to consider Leander as a corporate destination. It’s exactly what we look for in economic development.”

Posted in: Investing, Gold, Texas Bullion Depository
By U.S. Gold Bureau
More from this author
Did you like this post?
0
0
Search The Blog
Categories
Recent Posts