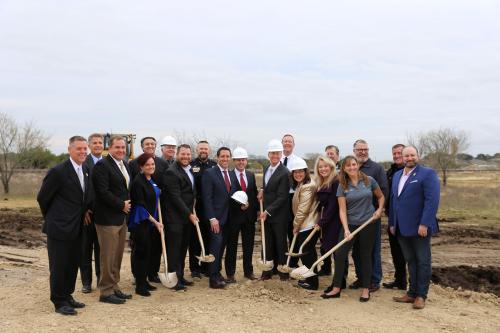 (LEANDER, TEXAS) — Lone Star Tangible Assets (LSTA) Chairman Matt Ferris announced last week that the company broke ground on the most advanced precious metals depository in the world. The facility will serve as the new home for the Texas Bullion Depository, which is currently open for business at an existing facility in North Austin.

"This vault will be the largest Class 3 vault in the state. It will weigh as much as 10 NASA space shuttles and have the capacity to hold up to $350 billion in precious metals – more than is currently held in Fort Knox," Ferris said. "If market forces dictate – and we think they will – the site will have the capacity to expand by an additional 85,000 square feet."

The 40,000-square-foot facility will be built on 10 acres in Leander, Texas. Construction is expected to be complete in late 2019, said Ferris.

The Texas Bullion Depository has been in operation since June of this year when services were launched for individuals, businesses, trust and estate accounts. The number of account openings continues to grow, with the average account valued at over 200,000 USD.

LSTA’s operating companies, U.S. Gold Bureau and WholesaleCoinsDirect.com, buy and sell precious metals to individual investors and will help to source depositors for the new facility, though they also offer secured shipping for investors who choose to store their gold and silver at the location of their choosing or at home.

LSTA has many new and exciting projects on the horizon to expand the reach of the Texas Bullion Depository – including gold-backed payments systems, electronically traded gold financial products, and international offerings for citizens located in parts of the world where a stable currency is a luxury unavailable to them.

Ferris was joined at the ceremony by Texas State Comptroller Glenn Hegar and State Rep. Giovanni Capriglione, author of the legislation that created the depository as a state entity under the Comptroller's purview. Leander Mayor Pro Tem Michelle Stephenson was also in attendance.

"This groundbreaking is a milestone in what is a historic achievement: the first ever state-administered gold bullion depository," Hegar said. "I'm very proud of the work my team has done, and I'm thankful for the efforts of (depository operator) Lone Star Tangible Assets to make this day a reality."

LSTA is shouldering the entire cost of building the depository. It will include space for highly secure precious metals storage and will incorporate the latest technology in security systems, including advanced perimeter defense and high-definition security cameras.

When Leander was selected to be the future home of the depository, city officials hailed the decision as one that would bring sustainable jobs and encourage other industries to consider Leander as a corporate destination.

"This is a huge win for the citizens of Leander," Stephenson said. "We're proud to be the Texas home for precious metals, and it strengthens our reputation as a growing business destination. The Comptroller's office and Lone Star Tangible Assets have been outstanding partners in this effort."