Swiss Gold: A puzzling month suggests a degree of caution 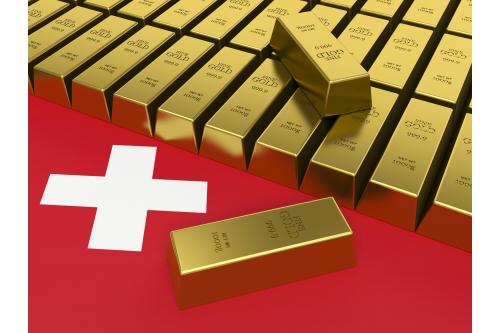 gold bars
Posted in: Investing , Gold
By Lawrie Williams
No comments
More from this author

Swiss Gold: A puzzling month suggests a degree of caution

We really don’t know what to make of the latest official gold import and export statistics out of Switzerland, released just over a week ago for the month of September 2017. Switzerland’s import and export figures are hugely important in terms of gold flows from West to East (usually) as its gold refineries are the principal conduit for producing gold bars and wafers in the kinds of sizes most in demand in the East. Some estimates put gold flows via the Swiss refineries as accounting for the equivalent of more than 60% of global new mined gold volumes – even higher in some years. Last year, for example, total Swiss gold exports totaled over 2,150 metric tons (Note: All tons in this article are of the metric variety - 2,024 pounds), while global new mined gold output was around 3,250 tons. If one removes Chinese gold production of around 450 tons from the global total (what is mined in China stays in China), the proportion of gold flowing through the Swiss refineries was equivalent to around 77% of net available new mined gold! In overall terms Swiss gold exports and imports in September this year were not unusual. Imports totaled 159.1 tons, and exports almost matching imports were 147.2 tons. But it is the country-by-country breakdowns of both the import and export figures which seem to provide the real anomalies.

Let us explain. Taking Swiss gold imports first. The three biggest exporters of gold TO Switzerland in September should all normally be considered traditional export markets for gold flowing FROM Switzerland – namely Hong Kong, The United Arab Emirates (UAE) and Thailand – all of them primarily gold fabricators and sellers. None are significant gold producers. France also featured in 5th place among the exporters of gold to Switzerland that month – a country better known for its hoarding of gold than for its production, although with some French overseas territories now producing gold this could be changing – but not in terms of the kind of volume of gold flows seen in September (10.8 tons) – see the chart below from Nick Laird’s www.goldchartsrus.com website.

Note: A tonne is a metric ton equivalent to 2,024 pounds Most of the other countries sending gold to Switzerland in September are indeed gold producing nations with the exceptions of Germany (4.3 tons and Italy (2.1 tons). The biggest supplier of gold to Switzerland was the USA (13 tons) although as the world’s fourth largest gold mining nation (After China, Australia and Russia) that is not too much of an anomaly, although the Swiss figures do break out a small amount of gold coins being in the import mix from the USA – perhaps another sign of dishoarding, albeit a small one. The suggestion which comes to mind from the above figures is that those nations supplying most of the gold to Switzerland in September had perhaps overbought in earlier months and were destocking, although there could also have been an element of profit taking given the gold price is, even now, around 10% higher than it was at the beginning of the year. But with the key high demand times for the world’s principal gold consumers – China and India – generally in the final quarter of the year, the return of so much gold from the East back to Switzerland has to be a little disturbing for gold bulls.

Swiss gold exports in September also present a major anomaly with the United Kingdom accounting for almost half the total. The UK is usually a major supplier of gold to Switzerland (with 450 ounce London Good Delivery gold bars being sent for re-refining and remelting into the smaller sizes mostly required in the Asian markets) a return of this magnitude could suggest a shortage of physical gold in the London market, although other figures do not necessarily support this. London is a major depositary for global gold so it is possible the gold flows into the UK (London) in September are perhaps more of a book balancing exercise. Apart from this huge UK anomaly, flows into individual nations were pretty much as expected, with mainland China the biggest export market, followed by India, Hong Kong and Turkey, while France was also a major importer just about cancelling out the volume of the flow into Switzerland from that country. Significantly flows into mainland China were once again higher than into Hong Kong further confirming that Hong Kong figures are no longer a proxy for the whole of China and suggesting that media headlines reporting falls in gold exports from Hong Kong to mainland China are pretty much irrelevant these days. Hong Kong gold imports and exports may well have provided a proxy for gold movements into the Chinese mainland five years ago - but not today. So what can we glean from these somewhat anomalous gold flows out of Switzerland in September. Perhaps most significant could be what appears to be an overall fall in imports into China and India at this time of year compared with previous years. Last year for example Swiss gold exports to mainland China totaled 35.9 metric tons, India 27.3 tons and Hong Kong 11.6 tons. This year’s September total represents a major fall in terms of China and India, although the Hong Kong inflow is much the same as a year ago. However, it should be noted that a year ago UK gold imports from Switzerland were also very high at 52.4 tons so perhaps the high UK volumes are a timing anomaly. But what does this data mean for the gold investor? Perhaps one should exercise a degree of caution until Q4 data starts to come in. Asian demand is absolutely key to the global total and to gold’s supply/demand fundamentals. We see this as likely to grow further in the years ahead as more and more Chinese and Indians move into the middle class - middle income consumer categories. In China demand seems to have slipped back from the record 2015 level, but year to date appears to be a little higher than last year, while Indian demand was very muted in 2016 due to various government initiatives to try and control money laundering and tax evasion and that also appears to be picking up a little this year too. Assessing true Indian gold demand, though, can be difficult because of gold smuggling to try and avoid import taxes, so real demand could be as much as a couple of hundred tons higher than officially stated figures. The USA in particular has seen something of a hiatus in purchases of gold coins and bars by individuals, which is shown up strongly in the very low sales figures out of the U.S. Mint for its gold coins so far this year. The continuing strength of the equities markets has had a strong impact here, but with many commentators warning of an imminent equities crash it might well be a good time to initiate, or add to, a proportion of one’s savings in gold or silver bullion. All the hype in the media around record Dow and S&P Index levels seems to ignore the fact that the gold price has also grown decently in the current year (up around 10%), despite its recent fall, while those smart enough to have invested in palladium would have very comfortably exceeded the gains in both the DJIA and the S&P500. Like any investment, gold bullion can rise or fall, but seldom sees the kind of rapid crash in price which can occur when an equities bubble bursts. It is long term wealth insurance and should be treated as such.
November 1, 2017