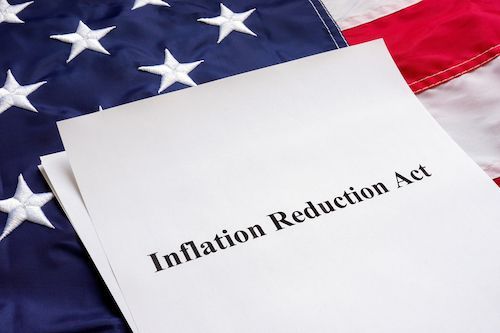 On August 7, 2022, the U.S. Senate passed the Inflation Reduction Act of 2022. Despite the title, the bill has little to do with inflation reduction. The bill is a rebranded, scaled-down version of the Build Back Better Bill of 2021. The 750-page bill is mostly climate initiatives, health care investments, a more extensive IRS and higher corporate taxes and filled with several special interest projects. The next steps for the bill are a House vote on August 12, 2022.

The most considerable portion of the bill is $369 Billion goes to the largest climate investment in U.S. History. The bill allocates $80B to expand the IRS, with $47 billion of that $80B specifically for increasing audits. The Washington Post examined the IRS numbers concerning audits and found that 77% of  all IRS audits are made against households making less than $200,000 per year. The Biden administration has repeatedly added IRS funding into different bills. The administration claims the "tax gap" is a significant problem and represents the cure to the budget deficit. The tax gap represents the difference between taxes owed and the  taxes collected. The Treasury claims the number is around $600B per year. The Treasury also claims that 28% of the tax gap happens in the top 1% of earners and 52.7% is in the top 5% of earners.

If these numbers are believable, why not reallocate current auditing resources to go after the worst offenders? Wouldn’t it make more sense to prove government enforcement of the top earners is profitable before spending $80B on new enforcement? It doesn't make sense to say people responsible for 52.7% of the tax gap are only audited 15% of the time. 94.4% of American households make less than $200k per year, yet are audited 77% of the time. The audit numbers would look very different if the government were honest about its intentions.

It is worth noting that CNBC reported that earners making more than $200,000 (about 5.6% of the population) pay 62.8% of all taxes. Politicians repeatedly claim that top earners are not paying their fair share. All citizens should contribute to the common good, but what is the government's interest in raising the taxes on people already paying disproportionately more than their share? CNBC reported that 57% of U.S. households paid no federal income tax in 2021.

Suppose the government is genuinely interested in reducing the inflation burden on the lowest income people. In that case, it should spend less, not more. Congress should tighten its belt instead of ramping up populist "eat the rich" spending bills.

President Biden has repeatedly claimed his spending bills won’t increase taxes on households making less than $400,000. How exactly does that work? Even if it is true concerning federal income tax, there will be flow through that will strain everyone. Businesses and business owners are not going to pay more in taxes, more in labor, more for materials and production, and then not pass those costs onto consumers.

How would the government enforce the tax gap? Suppose the government has reasonable suspicion that someone is engaging in tax fraud. In that case, the current process requires a warrant to search their banking records. Suppose the government estimates how much and who is not paying their taxes. Why doesn't it get warrants to examine the suspicious bank accounts? The most straightforward answer is usually the best. The simplest answer is that the government doesn't know who is committing tax fraud. The most logical action is for the IRS to get rid of warrants and engage in mass surveillance. The IRS wants software to spy on bank accounts to watch cash inflows and outflows to ensure people report all their income.

The "Inflation Reduction Act" seems to be a Trojan horse and will not deliver on its promise to reduce inflation. Both the U.S. Congressional Budget Office (CBO)  and the U.S. Chamber of Commerce (COC) have made blistering statements opposite to the White House claims about the bill.

The COC published a letter critiquing the edited bill. Here are some quotes from the letter

“Despite the elimination of many harmful provisions included in prior versions of this bill, the legislation would still impose significant new tax increases and unprecedented government price controls that would deter investment, inhibit innovation, and undermine economic growth. Despite rebranding the legislation, the “Inflation Reduction Act,” the bill could increase inflation in the short term and would definitively not reduce inflation over the long term, according to multiple analyses.”

“As a result, many small and mid-size companies would be suddenly swept up in this provision that has been advertised as only applying to the largest firms. The net effect of the Book Minimum Tax would be less capital investment, making America poorer and reducing future economic growth.”

“Price controls on pharmaceuticals would significantly reduce private sector investment in new research and drug development. Analysis indicates that this could result in a loss of nearly 600,000 jobs.”

Democrats have stated the bill will reduce government deficits by $300B over ten years. However, the CBO says deficits will increase by approximately $1.60 Trillion over the next decade. There is an almost $2T disparity between the two projections. Either someone is lying or is insanely bad at math. Since the bill's name is "Inflation Reduction Act of 2022” and has nothing to do with inflation, it probably isn’t a broken calculator problem.

The bill looks like it will pass the house quickly and be signed into law by President Biden. Despite the rhetoric, this bill has nothing to do with reducing inflation. The bill is not a new plan but a failing bill that keeps getting renamed. The first name was the "American Rescue Plan," then it became "Build Back Better," and now it is "The Inflation Reduction Act of 2022." No matter what the bill is called or how it is spun, this is an expensive entitlement program the government wants you to pay for without looking under the hood or knowing the price. The price is a minimum of $750B in new spending, your privacy, and unlimited, warrantless government access to your bank account information. It may sound like a conspiracy theory or something which could never happen in America, but sadly, it is happening.

Do you have a plan when the government monitors your bank account to see how much more taxes to collect from you? It's not just your bank accounts; your retirement accounts are also in harm's way. The politicians think they own you and your money. If you let them, the politicians will take everything they can. Will you grit your teeth and pay, or will you do what is necessary to fight back and get out of harm's way? Will you throw the proverbial tea into the harbor? What if you could legally take some chips off the table outside the government's prying eyes? Would you want to do it?

Yes? Why not store some of your wealth in gold?

Call the U.S. Gold Bureau Today for a Free Consultation.

Posted in: Silver Gold Platinum Palladium Market Alerts
by Ryan Watkins, Op-Ed Contributor
Did you like this post?
0