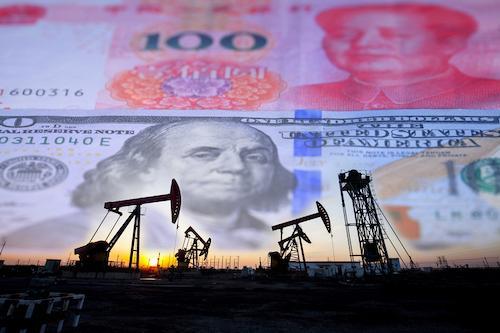 audi Arabia has been in negotiations with China about allowing China to buy oil with Chinese yuan instead of the U.S. dollar. Talks began one week after the Saudi Crown Prince Mohammed bin Salman and the U.A.E. Sheikh Mohammed bin Zayed al Nahyan both declined phone calls from President Biden concerning increasing Saudi oil production to ease soaring gas prices due to the conflict in Ukraine. The relationship between the U.S. and the Saudis has been becoming increasingly strained in the last few years. The relationship seems to have worsened under President Biden after candidate Biden said Saudi Arabia should be a pariah concerning the 2018 killing of journalist Khashoggi. After the Afghanistan withdraw, Saudi Arabia has entered into a multiple international military cooperation agreements including cooperation agreements with Russia.

This was an unexpected decision by the Saudis. In May 2021, the U.S. passed a law requiring sanctions on any country buying weapons from Russia. The Saudis knew this and went to Russia anyways, as did Egypt, purchasing fighter jets. The Saudis seem to be preparing to move away from their allegiances to the United States and to the petrodollar.  Currently, the U.S. is actively removing sanctions on Saudi Arabia’s most dangerous Persian Gulf enemy Iran and has stopped delivering precision missile systems in defense against the Iranian backed Houthis in Yemen.  There are many reasons to think Saudi Arabia is seriously strategizing how to diversify outside the petrodollar system.

The petrodollar is the most important element to international U.S. dollar dominance and political influence in the world. Diversifying away from the dollar could be a major shock to most world markets. Are the Saudis seriously considering abandoning the dollar to use the Yuan or is it just political posturing to dissuade Washington from the Iran nuclear deal or possibly to restart the military aid against the Iranian backed Houthis in Yemen after the recent oil field attack?

Unfortunately, the threat is very real and very likely. Approximately 53% of the Saudi government revenue comes from oil. China is the largest consumer of oil on earth. China imports 1.76 million barrels per day from Saudi Arabia and is Saudi Arabia’s largest customer. For comparison, the United States only imports 500,000 barrels per day down from 2 million barrels per day in the 1990’s.  Saudi Arabia has the capability of producing 12 million barrels per day and is currently producing close to 10 million per day. China imports 1.6 million barrels per day from Russia. If there are any disruptions from the Russian supply, Saudi Arabia could ramp to max production and China would buy every additional drop of crude. The Saudis also are likely to proactively protect themselves against any future U.S. imposed sanctions through the SWIFT international banking system like the sanctions imposed on Russia. Also, the United States government is committed to moving away from fossil fuels toward renewable energy sources with a net zero emission by 2030. The Saudi government released a 2030 plan as well.  The second pillar of the Saudi plan is to diversify their economy. China has not made the same net zero commitment and will be using gasoline for decades to come. Simple economics reveal the reality and likelihood of the Saudis moving away from the dollar to protect the longevity of their own economy. It is not a matter of if the Saudis will take payment in the yuan, but a matter of when it happens and what economic waves will be felt across the globe.

Saudi Arabia is not discussing moving all oil sales into the yuan. Instead, they are discussing allowing China to purchase their oil in yuan. In other words, Saudi Arabia is diversifying outside of the dollar a little bit at a time, exactly as they have stated they are going to do. The Saudis have too many dollar-based investments around the globe to move completely out of the dollar immediately. The Saudis have approximately $800B invested in America with 43B in the stock market alone. It is more likely the Saudis will remove or liquidate different dollar-based investments over an extended period so the transition will do as little damage to the Saudi economy as possible while still meeting their 2030 target dates.

The Saudis are diversifying outside the dollar and outside the shadow of American allegiance. If the dollar loses international confidence as the reserve currency, most Americans will feel incredible and historic financial pain not felt since the Great Depression. Despite the sobering gravity of the situation, there is a very practical lesson in all this. Diversify some of your assets away from the dollar.  The U.S. Gold Bureau does recommend a small percentage in your portfolio should be a blend of both bars and coins as a hedge against the dangers of being too heavily weighted in paper and dollar backed assets. The largest governments, banks and hedge funds have been diversifying outside of the dollar for years. If the smart money is moving some of their assets outside the dollar, what should you do? Call the U.S. Gold Bureau at (800) 775-3504.

Posted in: Investing Silver Gold Platinum Palladium
by Ryan Watkins, Op-Ed Contributor
Did you like this post?
0