The Platinum Maple Leaf of Canada 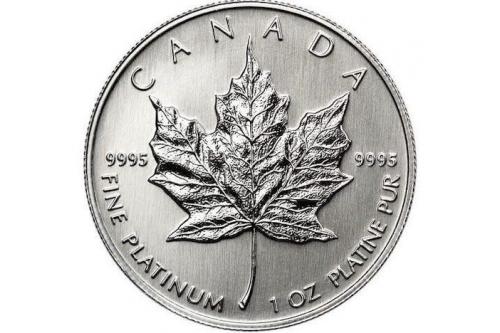 The Platinum Maple Leaf of Canada

While most of us are more than familiar with the Canadian Gold Maple Leaf bullion coin there is one more coin that only a few investors are aware of.

The Platinum Maple Leaf was produced by the Canadian Royal Mint between 1988 and 2002 and then once again in 2009. The first series were available in a range of weights ranging from one-twentieth of an ounce to a full ounce; the 2009 issue was available in only the one ounce size. From 1988 to 1989 the obverse side of the coin showed an image of Queen Elizabeth II at age 39.

In 1990 the image was changed to show her aged 64 and then the 2009 coin carried an image of the Queen at age 79. All of these coins were minted in response to a major rise in interest by investors in platinum as a new investment medium.

However, during the 1990s this interest began to wane as the price of platinum reached epic levels. Today if you are interested in finding Platinum Maple Leaf coins, you might find that they can be somewhat difficult to come by as those that own them are rather reluctant to part with them. Even though they are scarce, these coins are still one of only three major platinum coins to ever be produced and are valued not only for their content; they are prized for their limited availability.

You can buy current Platinum Maple Leafs from the Canadian Royal Mint or you can buy smaller quantities that will be sent to you in vinyl sleeves. All of coins that have been minted are made from .9995 fine platinum and are registered as legal tender in Canada, not that anyone would ever spend one in the stores.

They have a face value of $1, $2, $5, $10, $20 and $50 Canadian, but are valued by the current selling price of their content or anything over this price that a collector might be willing to pay. If you are going to buy one of the latest issue of these Canadian Platinum Maple Leafs, you will be paying whatever the current spot price for platinum is on the market at the time you decide to make the purchase.

One thing that you can count on is that like gold, the price of platinum is expected to continue to rise as it has become not only a popular investment, but is being used heavily in the industrial world for a wide variety of products.