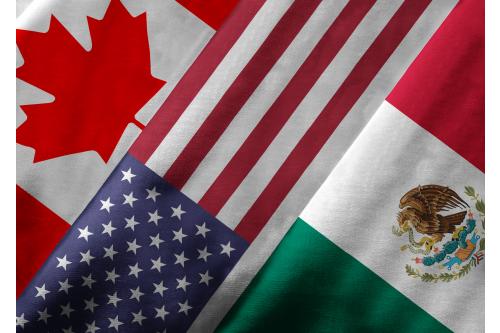 President Trump finalized a “New NAFTA” deal between the United States, Mexico, and Canada in the “USMCA” after more than a year of intense negotiations between leaders of the North American allies. Could higher prices in the auto manufacturing industry lead to higher values in precious metals used in vehicle components?


The North American Free Trade Agreement, formed in 1994 and formerly governing more than $1.2 trillion worth of trade among the three nations, has been significantly revised though will not go into effect right away.

Most of the key provisions will not start until 2020 as leaders of the three countries must first sign it and then Congress and the Canadian and Mexican legislatures must also approve it. This process could take a few months.

One major goal of the new deal is to have more cars and truck parts made in North America. In order to qualify for zero tariffs, a car or truck must have 75 percent of its components manufactured in Canada, Mexico, or the United States, starting in 2020. The current requirement is only at 62.5 percent.

Workers earning at least $16 per hour, starting in 2020, must also complete 30 percent of the work on any vehicle to be exempt from tariffs as well. That number gradually moves up to 40 percent for car manufacturers by 2023.

Many economists do believe these new rules will help some North American workers, but they also warn that some smaller vehicles will no longer be made in North America because of the increased costs to manufacture them under the new requirements. There are also concerns that automakers just won’t produce as many vehicles in North America to export to China and elsewhere overseas since costs would be higher in the USMCA region than producing vehicles in Asia.

In the end, hefty tariffs will solely be applied to overseas competitors, mainly China, and won’t affect Canada and Mexico. The three countries will continue to have the ability to send vehicles and car parts across their borders free of charge and without facing any tariffs should they meet the above quotas and restrictions. Trump’s tariffs will remain in place at 25 percent on Canadian steel, for now, as the two countries are still in discussions on lifting those tariffs.


How Does the USMCA Effect Precious Metals?


As discussed on this blog before, the most significant uses for precious metals in new cars are platinum and palladium in catalytic converters as well as silver and gold throughout electronic circuit boards. Once these parts fail in vehicles, these metals still retain their value and are almost always extracted.

And as new restrictions are set to begin in 2020 once the US, Mexico and Canada’s give final approval of the USMCA, the auto industry still faces an uphill battle as tariffs between the US and China are still being implemented and seem to be escalating with no end in sight. New car manufacturing costs are increasing along with sticker prices. Jobs also may be disappearing in the auto sector amidst these rising costs, with as many as 715,000 Americans potentially facing job losses. Ultimately, the American Gross Domestic Product could also be out as much as $62 billion all because of the domino effect of the country’s current international trade policies.

The bottom line is still this; the auto industry is struggling to head off the first major downturn in sales not seen since the great recession of 2008, many signs and indicators are still in play that could lead to a major economic downturn. Economists and auto experts alike think the USMCA will ultimately cause car prices in the United States to rise and the selection to go down, especially on small cars that used to be produced in Mexico but may not be able to be brought across the border duty-free anymore. Prices are expected to rise as automakers can no longer rely on cheaper Mexican labor while dealing with the prospect of higher compliance costs as well.

The outlook for America’s auto industry could mean trouble for the national economy and in turn the strength of the US dollar. Earlier this year, car sales were estimated to drop 2 million annually according to a study by the Center for Automotive Research.

Despite the agreement on the USMCA and its potential relief on auto manufacturing in North America, most of its provisions don’t go into effect until 2020 upon agreement from all governments involved. There is relief among auto industry executives that the deal is done, but costs will be high for big car companies. Canadian steel tariffs are still in place, and more car parts will have to come from North America, not from Asia, which has produced cheaper auto parts. It remains to be seen how car companies will react to these new policies and how it will ultimately affect their bottom lines, though experts expect that most costs will definitely increase.

However, the Trump administration did ease some provisions that would greatly benefit US farmers and blue-collar workers in the auto sector. Now his team can focus on its number one trade target: China.

As the Trump administration has cleared the trilateral trade hurdle with its North American neighbors, many questions still remain regarding the potential lasting effects of the new USMCA and international trade with China.

A consensus expectation is that overall prices will rise throughout the auto sector, and how this could affect auto components including silver, gold, platinum, and palladium. The overall economic outlook is not crystal clear either, though the stock market has responded well to the new trade deal, the auto industry remains in flux between heightened costs, new tariffs and new deals, we could see the dollar slip while precious metals remain stable and could rise.