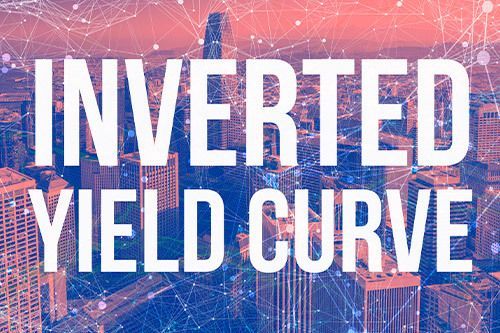 An abnormal yield curve in the bond market has been an accurate predictor of recession for over 64 years, according to research done by the Federal Reserve Bank of San Francisco.  Normally the yield curve slopes gently upward, with longer-dated bonds yielding more than shorter-dated bonds.  And that generally makes sense, as investors are rewarded with higher interest rates when tying up money for longer periods of time.  But an inverted yield curve is considered a rare occurrence, and implies a recession is up ahead.  Inverted means higher interest rates are paid for buying bonds with a shorter maturity, than a longer maturity.  The recession that follows is normally rough on stocks, and good for safe haven assets such as gold.

We are already 7 weeks into a yield curve inversion, according to chief investment officer Darrell Cronk, of Wells Fargo Wealth Investment Management.  As such, Cronk believes the bond market is signaling troubling times ahead.  But it is not only the length of time of the inversion that matters, but also the depth.  Cronk says the current yield curve inversion is the steepest we have seen since the year 2000.  Often a steeper inversion implies a deeper recession to come.

How Inverted Are We?

Currently, the 1-yr Treasury yield is 3.23%, and the 30-yr Treasury yield is 3.10%.  Most longer maturities (2, 3, 5, 7, 10, and 30-yr) are lower than the 1-yr yield.  The only exception is the 20-yr Treasury, which yields 3.31%.  This is certainly an abnormal yield curve, and indicates that the technical recession which was first acknowledged at the end of July ‘22, is just getting started.  As you may recall, inflation for July ‘22 came in at 8.5% higher than inflation for July ‘21.  Inflation has become so important in the lives of average Americans that new pending legislation has been named “The Inflation Reduction Act”, though it is not expected to reduce inflation in a meaningful way.

In a technical sense, recession was acknowledged when growth was negative for the 2nd quarter in a row at the end of July this year.  The continued yield-curve inversion suggests this recession may become deeper and more pronounced in the months ahead.  This idea seems to be supported by data regarding layoffs, which show a more than 12-fold increase in announced layoffs reported in July ‘22, over the same period a year ago (see graph).  37,000 vs 3000.  During the 1980 presidential election campaign, Ronald Reagan famously said “…a recession is when your neighbor loses his job.  A depression is when you lose yours.”  Unfortunately, more job cuts have been announced since the July numbers were released.

Minutes from the Federal Reserve meeting in July are due to be released this week, and insiders believe investors might be disappointed to discover more interest rate hikes mentioned in the narrative.  This would tend to continue the yield curve inversion, and deepen the ongoing recession further.  One of the stated goals of the interest rate hikes is to try and reduce the rate of inflation, or at least to slow the rate of increase.  But this too has challenges, with the gap between the  Producer Price Index (PPI) and the Consumer Price Index (CPI) being the widest in over 30 years (see chart).  This indicates that there are future price increases in the pipeline already being experienced by producers, which haven’t yet been passed on to the consumer.  Agriculture and energy production are examples of sectors likely to contribute to higher future inflation.

As we have discussed before, the inflationary and recessionary conditions combine to create “stagflation”, a phenomenon not often observed in the American economy.  The inverted yield curve indicates the recessionary side of the equation is set to continue.  Other indications such as a severe slowdown in manufacturing output (see graph), seem to confirm the outlook for a slowing economy.  In all this forecasted financial gloom, is there a bright spot or silver lining to these clouds?  Thankfully, yes there is.  A gold and silver lining, to be exact.  While the economic clouds on the horizon appear ominous, the gold and silver lining appears glorious.  The conditions we see have helped establish a new era for gold and silver, last seen 45 years ago.

While many have talked and written about the last stagflationary gold and silver era of the 1970-80’s, fewer were able to recognize it before it happened.  Today we have the benefits of hindsight and the advantages of history at our disposal, as well as the opportunity to participate this time around.  Gold and silver increased 5-8x during and immediately following the last major stagflationary period.  Even if only performing half as well this time, we would still be looking at 2-4x; a doubling or quadrupling of value in an environment where stocks, bonds, and real estate can falter and struggle.  There is still time to sell other assets, and transition a portion over to precious metals.  We are closing in on what appears to be the end of a bear market rally in stocks, typically a good opportunity to sell before the next leg down.

Believe it or not, investing in precious metals is not primarily about growth.  It is primarily about safety and preservation.  What good is it to have assets rising 750% over time, in a currency that loses 1000% of purchasing power over the same period?  This is a mild representation of what has happened over time, as the article “Rising Markets, Falling Dollars, Emerging Libertads” briefly illustrates.  Keep in mind, that is an example when markets are rising/have risen.  When markets are falling, as can often happen during periods of stagflation, the difference in performance between metals and stocks is even more pronounced.  When stocks rise, we often end up with more dollars that purchase less.  When stocks fall, we end up with fewer dollars, that purchase exponentially less.

Owning gold and silver during a season of growth in the metals is not so much about having more dollars after selling.  It is more about being able to purchase the same or similar items after they have risen in price (in dollar terms), than we could before the inflation was felt.  In the end, having more dollars is a meaningless gesture unless we can purchase the same or higher amount of goods and services with those dollars.  Owning precious metals helps ensure that no matter what happens to the value or existence of the dollar, we will be able to preserve our purchasing power, and thereby help protect and continue the standard of living our families have known.