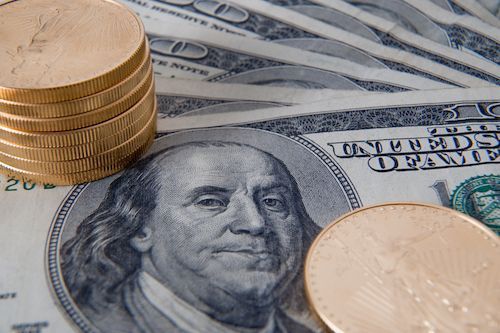 Sometimes headlines about legislation garner more attention than is warranted, when the resulting impacts are measured.  Occasionally government officials from across the political spectrum (such as Bernie Sanders and Ron Paul) hold similar views about the shortcomings of a particular bill or legislative accomplishment.  Today we could say this about the “Inflation Reduction Act” that recently passed.  Critics from both sides of the aisle acknowledge that despite the catchy name, the legislation likely does little to curb the impacts of inflation on the average American family.  This in and of itself hints at the positive future potential for gold and silver.  Today we will take a look at the potential effects of this legislation, combined with technical signals currently flashing strong support for higher precious metals prices in the 3-12 month timeframe, and beyond.

This report from Bloomberg provides a concise summary of winners and losers from the “Inflation Reduction Act”, and also discusses what is not included in the final bill compared to the promises implied to the public when initially discussed.  Despite an extra $80 billion dedicated to the IRS, none of the proposals to increase taxes on the wealthiest Americans made it into the final bill.  This implies that the 87,000 new IRS agents due to be hired as a result of this legislation will likely spend the bulk of their time combing the finances of Americans not deemed to be among the most wealthy.  A CBS report from 2019 revealed that the highest rate of tax audits have routinely occurred in the poorest areas of the country.  8 of the 10 most-audited counties are in Mississippi, one of the poorest states.

A long-time gold and silver advocate, retired Texas Congressman Ron Paul released the following as part of his recent “Liberty Report”.  “The laughably-named ‘Inflation Reduction Act’ will double the size of the IRS - making it larger than the Pentagon, State Department, FBI, and Border Patrol...combined! And that will save money?”, he quipped.  This seems like a good time to remind everyone that there are no requirements to report precious metals holdings from year to year on your tax return.  This makes gold and silver one of the last bastions of financial privacy available to save/invest in today.  (One notable exception would be gold or silver held inside an IRA, as all IRA’s have similar annual reporting requirements).  But whether in an IRA or outside an IRA, gold and silver appear set to outperform in the inflationary environment this legislation does little to address.

Insights From the World Gold Council

A recent report from the World Gold Council reveals that as of August 4, gold coin sales in the United States are expected to total nearly 2 million ounces for 2022.  This would be the highest amount of gold demand and sales from the US Government Mint since 1999, indicating a strong appetite for sound money among the American public.  Given we are experiencing the highest inflation rates in 40 years, it makes sense why Americans are more interested in gold and silver.  But there other more specific reasons that suggest now may be an opportune time to increase our personal holdings of precious metals.

Sometimes we think professional money managers should know something the rest of us don’t, about where to allocate capital.  Perhaps sometimes that is true.  But other times, we would do well to go in the opposite direction.  Often they can be wrong over half the time, leaving an unhappy trail in the wake of their recommendations.  What if we could identify what types of positioning they typically get wrong, and do the opposite?  When it comes to the future price of gold, we can often do exactly that.  Since 2006, there have been only 5 times when money managers were net short on gold futures contracts.  This means they were positioned to make money if gold went down in price.  They were wrong most every time.  They went net short again in mid-July, which indicates a rally is probably likely.

Analyzing previous net short data, we can see that gold moved higher within 3 months, 88% of the time.  It was higher in 6-months 95% of the time, and showed positive returns in 1-year, 100% of the time after money managers took a net short position (expecting the price to drop), sometimes growing over 18% in price (see chart).   There are other indicators worthy of our attention as well.

When we look at long term average gold positioning among money managers, and note when they dip below their long-term exposure by a factor of 2, we find 13 instances in the last 15 years.  Gold moved higher from there over the next 3-12 months, 81-90% of the time (see graph).  We find ourselves here again, currently.  But it is not only the sentiment of money managers regarding gold we can look to, to find historical support for a rise in future gold prices.  We can also take a look at how they are positioned in the dollar, and in 10-yr US Treasury securities.

It turns out that when money managers are net long exposure to the dollar, while simultaneously net short exposure to 10-yr treasuries, it has historically prefaced a rise in the gold price 80-97% of the time over the next 3-12 months.  This has happened 17 times in the last 15 years, most recently right now.  So if history is any guide, there is an 80-88% probability gold moves higher within 3 months, and a 90-100% probability it is higher within a year, depending upon which data set we track from here, with gains of up to 18%.

When we view the technical analysis in the graphs above provided by the World Gold Council, combined with a record inflationary environment not tempered by the latest anti-inflation legislation, we can expect higher gold and silver prices in the near-to-intermediate term.  When we factor in the recessionary conditions beginning to develop, it correlates to an environment known as “stagflation”.  Stagflationary conditions typically preface much higher metals prices longer term, looking out 2-5 years from now.  With bright prospects from 3-months to 5 years from now, it will take more than legislation with a catchy name to slow down this gold and silver train, which continues to build momentum.