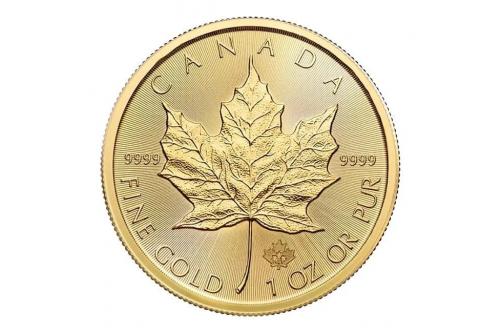 The Canadian Mint is a young mint when compared to other countries throughout the world. It was founded in 1901 and minted its first coin in 1908. The first silver dollar was minted in 1935 and it wasn’t until 1979 that Canada minted its first gold bullion coin, the Canadian Gold Maple Leaf.

When the idea was first proposed to the Canadian Mint, it was rejected. But as time went on, the Krugerrand continued to corner the gold coin market, at one point accounting for 90% of the entire market. This led several countries to produce their own gold bullion coin, with Canada being among them.

The Canadian government decided on the name the Gold Maple Leaf for the gold bullion coin and proposed a three year testing period for the coins, initially with only a face value of $50. One million were to be produced in the first year. The test period is so successful that it is later extended for another ten years, and extended again so that it is still being minted.

The Canadian mint takes great pride in producing its coins with only Canadian gold and with a purity of .9999. It has also issued some special issue coins with a purity of .99999. In 2007, the Canadian Mint created a coin with a face value of one million dollars containing gold worth—at the time—$2 million. Although initially meant to be created to promote the Mint and its new line of special issue .99999 purity Gold Maple Leaf coins, the Mint has since sold five of the coins.