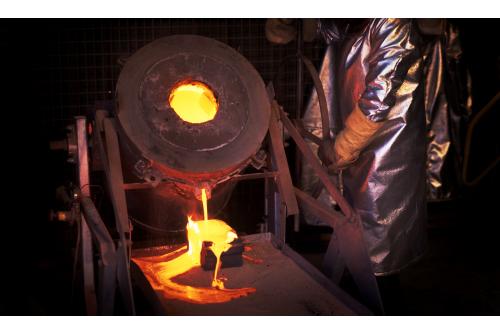 The medium to long term future of gold remains strong and, if nothing else, it will at least act as a wealth protector. Hold some gold in your investment portfolio – the general recommendation is 10-12.5% - as an investment diversifier – it will help smooth out the ups and downs in other investments. Equities look toppy, even after the recent short lived crash in the Dow and S&P, and bitcoin has already come back around 50%. Both equities and bitcoin potentially look vulnerable to further drops. Market falls could bring down gold with them as investors and institutions look for liquidity, but as we saw in 2008/2009 gold will not fall by nearly as large a percentage as equities and other asset classes may, and will also be far quicker to recover. Indeed any such downturn, if it should happen at all, would provide a major buying opportunity.


But that’s looking at a worst-case scenario. In terms of supply and demand fundamentals there are many positives in favor of gold – notably ever-increasing demand patterns, particularly in Asia, and the beginnings of a turndown in new mined supply. The combination of these factors is what makes gold so appealing in the medium and long term – and even short term the general consensus among analysts is that the gold price will likely rise in the current year too.

If one looks at gold demand statistics one sees that gold continues to flow every year in substantial quantities from perhaps weaker hands in the West to stronger hands in Asia and the Middle East. This process is exacerbated by a difference in attitude among gold investors in the two hemispheres. In the West there tends to be more trading of gold with more investors looking for short term gains, whereas in the East gold is seen more as a store of wealth – protection against currency degradation and ever-present inflation. Population growth is higher in the East and the process of moving upwards financially is much more prevalent. Arguably, in the West, the movement from the working to the middle classes has already mostly run its course, and the aims of the middle classes in terms of wealth accumulation and protection are enormously different from those of gold consumers in the East.

Take China, already the world’s largest gold consumer, as the key here. Population is estimated at over four times that of the USA, and the latter’s population growth is already beginning to turn downwards into negative figures. Major, and well respected, consultancy McKinsey recently went on record as predicting that by 2022, 76% of China’s urban population will have moved into the middle class bracket. That in itself is a hugely bigger figure than the total U.S. population with China’s urban population currently estimated at around 57% of its total, and growing. True McKinsey classifies the middle class in China as urban households earning between US$9,000 and $34,000 a year – which may seem low by U.S. standards, but purchasing priorities tend to be hugely different. Many Chinese families will put a small amount of their monthly income into buying gold wafers or small bars and building up savings in that manner - and the Chinese banks make it easy for them to do this with ready gold availability at nearly all branches.

In Asia and the Middle East too, the mark-ups on jewelry are tiny in comparison to the U.S. and Europe so many will hold their gold jewelry as a form of precious metal investment in a way that Western people are unlikely to do.

India, the world’s No. 2 gold consumer, almost parallels China in terms of population size. Indeed it is about to surpass it as the birth rate is higher. While Middle Class growth rate is high it’s from a far lower start, and while owning gold is very much part of the Indian psyche, traditional gold holders tend to be in rural areas. The take-up of gold by the urban middle classes may be high, but probably not as high as in China, although gifting gold remains an extremely important part of Indian wedding celebrations.


Gold Flow to Asia and The Middle East


If we follow Swiss gold exports we find around 80% of gold flows tend to be to Asia and the Middle East. This is particularly significant because the Swiss gold refineries provide the key conduit for converting doré (impure) bullion, received from mines around the world, and large gold bars (mostly imported from the bullion depositories in the UK) into the small bar and wafer sizes in demand in the East. The Swiss refineries process the equivalent of around two thirds of global new mined gold output annually. This percentage may be diminishing given the growth of competitive refineries in the Middle East, India and China in particular, but the Swiss refinery imprimatur is still the best accepted worldwide.

This Asian and Middle Eastern demand alone would seem to be more than sufficient to keep the gold train rolling, but it is all in addition to some still decent gold demand throughout the rest of the world. The past couple of years have, for example, seen a return to growth in the holdings of gold-backed ETFs after big outflows from 2013-15.

New mined gold supply at around 3,200 metric tons a year, may well be beginning to fall (peak gold) as the drop in the gold price following its 2012 top led to cutbacks in capital projects and gold exploration around the world. While any decline may be minimal at the moment, with some countries like Russia, Australia and Canada still seeing growing new mined supplies, the overall global trend is definitely downwards and will accelerate. It will take the industry some time – and probably much higher gold prices – to recover from this downtrend in output.


So, the twin effects of continuing high demand (in the East in particular) driven by the growth in the middle classes in the high population countries like China and India, coupled with a decline in new mined gold production will increasingly put a strain on the supply/demand balance. While this may not initially lead to a big price boost for gold it should keep prices rising at least gradually over the years ahead. Should the equities markets see a sharp downturn, as many experts are predicting, then this could drive more investment into perceived safe havens like gold which would give the yellow metal price a further boost. To this observer the future of gold as an investment looks bright indeed.