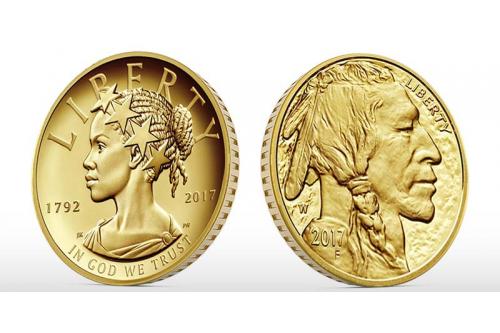 The 2017 Gold American Buffalo Proof coins went on sale earlier this month and the public response has been strong. This series was first introduced in 2006, and the following releases are widely considered classic coins. The original design, however, can be found on what is commonly known as a “buffalo head” nickel.

This nickel was first minted in 1913 as an effort to add more artistry to American coinage – it displays the profile of a Native American on one side, and a buffalo on the reverse. Buffalo nickels have been known in the coin community for their beautiful design ever since, but the design itself proved unsustainable to wear and tear, so buffalo nickels were discontinued in 1938. The design would not be seen again until 2001 on a commemorative silver dollar, and then in the Gold American Buffalo series that began in 2006 (where it can be seen today).


The Changing Face of Lady Liberty

Depictions of Lady Liberty have changed since she was legally required on United States coins in the form of “an impression emblematic of liberty, with an inscription of the word Liberty, and the year of the coinage…” Many of these depictions, like the 1878 “Morgan” dollar, were intentionally changed to better represent the American people.

When questioned about the current representation of Lady Liberty, Mudd said, “Liberty is a concept. Liberty represents an idea. How it is represented is not as important as the idea. If our money is going to represent people it should represent the people of this nation.” It is with this same intent that the United States Mint released the 2017 Lady Liberty coin, where Lady Liberty is represented as an Africa-American woman, as the beginning of a series of “…designs representing Asian-Americans, Hispanic-Americans, and Indian-Americans among others-to reflect the cultural and ethnic diversity of the United States.”


This is not the first time an African American has appeared on American coinage. In fact, it’s not even the first time that Lady Liberty has been modeled after a black woman, though it is the first to be marketed as such. A coin full of intrigue, the Double Eagle Gold Coin, was designed by Augustus Saint-Gaudens and features a standing Lady Liberty. It is a generally accepted truth that the model for Saint-Gaudens Lady Liberty on this coin (and the female figure who was also featured in a 1902 statue dedicated to William Tecumseh Sherman) was a young woman named Henrietta (Hettie) Anderson. One of Saint-Gauden's favorite models, Henrietta was referred to as having the “figure of a goddess” in his personal letters.

What isn’t mentioned is that Henrietta Anderson, according to the Saint-Gaudens National Historic Site, was of African American descent. The Museum Curator at the Historic Site, Henry Duffy, Ph.D., confirmed that “She was of mixed heritage, but she did certainly have African heritage. When you look at her genealogy she has grandparents who were black,” and went on to mention that Saint-Gaudens discusses Henrietta’s race in his memoirs, and was certainly aware of it. Duffy’s research indicates that these details about Henrietta Anderson were known at the time, but fell out of common knowledge. In the present day, with the introduction of the newest Lady Liberty, Duffy says, “The mint is making these [coins] more accessible, and the stories are coming back.”

The controversy over the 2017 Lady Liberty coin began when the Mint publicly stated that Lady Liberty would be represented by an African American woman in their initial press release, while the race is not mentioned in similar press releases.

“Many people outside of the numismatic community have been unaware of the changes in design to American coinage over the years," Hinsdale says. "These new changes being publicized by the United States Mint are bringing a new audience to the realization that the design of our coins is a representation of our country."