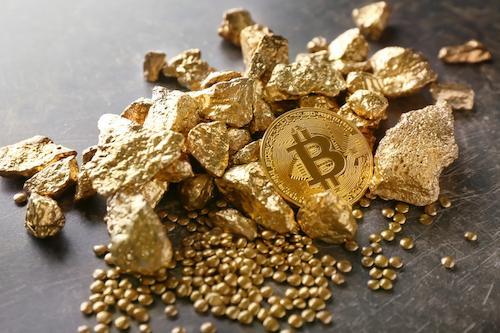 Perhaps you were able to watch the debate between Bitcoin advocate Michael Saylor, and gold advocate Frank Giustra.  If there is one issue no longer up for debate, it is the issue about which one of these two assets is a store of value.  Despite claims to the contrary, Bitcoin (and cryptocurrency in general) seems to do everything except hold its value.  If anything, it has proven to be a store of volatility.  Bitcoin has lost 50% or more of its value seven times in the last nine years, in as short as one day’s time.  Volatility can be great for traders who get in and out of a market at the right times, but may be devastating for traders who don’t.  Leverage (borrowed funds invested) only tends to magnify the volatility, rather than smooth out the transitions.  When traders with leverage are caught on the wrong side of a move, they are forced to sell into a downward moving market.

Opinions can differ among people, and cases can be made about the relative strengths of precious metals and cryptocurrency. But when we compare the pricing deviations between gold and Bitcoin, it becomes clear which one is more stable at any given time. This stability allows those investors with gains in a rising market more time to capture those gains by selling, and more time to prevent losses in a falling market. I wondered if gold ever had a 50% drop in the spot price. If so, how often, and how long did it take to fall that far? Looking back 100 years, it happened exactly once, and took two and a half years from peak to trough. In January of 1980, gold was $677.97. In June of 1982, gold was at $314.79 before moving higher again. This 50% drop happened once in 100 years over a two-and-a-half-year span, versus seven times in nine years in as little as one day for Bitcoin.

For those who only own precious metals, the obvious question becomes, “Can gold lose 50% again?” In a word, no. Not in the current environment. If we look at current financial conditions compared to those that existed from 1980-82, they could not be more opposite. The federal funds rate, for example, is the interest rate that depository institutions charge one another for overnight loans. In April of 1977, this rate bottomed at 4.07%, before rising to 20.61% in June of 1981. During the same period of time, gold went from $149.17 in April of 1977, to peak at $677.97 in January of 1980, before falling to a low of $314.79 in June of 1982. By way of comparison, the federal funds rate today is at 0.06%. Most cannot imagine a rate of 4.07%, let alone 20.61%. If anything, real interest rates may become more negative before rising significantly.

Crypto is an Asset, but it is Not Gold

No one is saying, at least not me anyway, that there is no place for cryptocurrency in portfolios today. I’ve dabbled with it, and still own some today. But we have to be real about what it is, and what it is not. It is not gold. As such, you should not view it as a core asset that has stood the test of time. Gold is and has. For that reason, I suggest gold and silver should make up a much larger percentage of our holdings than anything related to crypto. I hope crypto does well in the future; if so, it will make those investing in it more money. But I am not staking my financial future on it, nor am I am borrowing money to buy more. In that sense, I am perhaps more risk averse than some.

30-Year Perspective on Gold and Bitcoin

After nearly 30 years of working as a financial professional in the securities, banking, insurance, and precious metals arenas, I have seen what can happen when “the latest great investment” goes bust.  Gold, silver, and certain insured annuities (some with a connection to gold) never go bust.  Yes, I own stocks (including mining stocks), bonds, mutual funds, and some paper investments connected to gold, silver, platinum, and palladium miners and metals, with additional exposure to some cryptocurrencies.  But by a considerable margin, my largest holdings are tangible assets in a professional vault, and insured annuities.  Sadly, physical gold and silver make up only a small fraction of the assets owned by Americans.  In the interest of financial security for you and your family, I highly recommend storing a portion of your savings in physical metal.

The argument we sometimes hear about precious metals is that it is “too risky” as an asset class.  In my opinion, the opposite is true.  As has happened with cryptocurrency, the dollar has lost more than half its value in a few days’ time, when measured against gold in 1934.  But besides that one fast drop, what else do we know about the dollar?  We know that over time, the dollar has lost purchasing power consistently.  The attached graph indicates how many of today’s dollars it takes to buy what one dollar bought in each respective year.  For example, in 1929, you could buy 10 rolls of toilet paper for $1, versus for $15.14 today.  In 1944, you could buy 20 bottles of Coca-Cola for $1, versus the $14.71 you would need today.  Pick any item you can think of, and it likely takes more dollars to buy it today than it used to take.

So, I ask you, what is riskier – an asset that slowly increases in value over time, or an asset that slowly loses its value over time?  In that regard, precious metals have proven to be less risky than the dollar, when held for long-term savings purposes.  Granted, to cover living expenses to be incurred in the next few months, holding dollars is necessary and useful.  But even when dollars are placed in a bank account earning interest, or in a rising stock market, they cannot always keep up with the protection offered by gold and silver over time.  Especially at today’s low interest rates.  The obvious question then becomes, “If interest rates are so low now, doesn’t that mean they will go up?”  In short, probably not anytime soon.  If anything, real rates are probably headed lower still.

Cryptocurrency might be better suited for trading than for investing, depending on long-term goals.  But the new efforts by the IRS to capture tax revenue from traded cryptos can make that venture far less satisfying.  It is certainly not the privacy paradise people once thought it was.  For an asset class that you can buy and forget, without worrying about annual taxes and high volatility, I continue to recommend gold and silver.