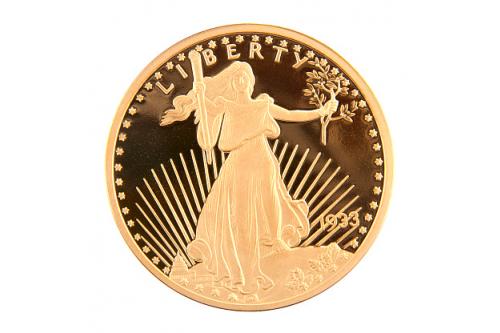 The 1933 Double Eagle Gold Coin: A Modern Treasure with an Intriguing Heritage

With so many different countries now offering their own gold bullion coins in an effort to claim their market share of the South African Krugerrand market, the US decided to enter the market in 1986. The United States Mint created the Gold Eagle as the first gold bullion coin ever created by the US and while sales of this incredibly beautiful coin did not start until October of this inaugural year they sold in record numbers, in fact it was not until 1998 that this sales record was finally broken.The Gold Eagle was offered in 1/10, 1/4, 1/2 and 1 ounce weights, which seems to be the same as most of the other countries issue. The only exceptions were Australia with eight different sizes of their Gold Nugget and China with its Gold Panda, China now offers only the five basic weights although they have changed the face values on their Pandas. Over the years it has been the largest and the smallest denominations that have been the biggest sellers.

Mankind has been producing coins as a form of currency for centuries and despite the fact that there have been millions of them produced, there are some that for one reason or another have become worth far more than their face value. One such coin is the 1933 Saint-Guadens Double Eagle. This gold coin was minted with a face value of $20, but as there is only one known example it sold at auction for $7,590,020 in 2002. This coin was a result of Teddy Roosevelt wanting to make changes to the American coinage as he saw them as being rather bland and boring. His personal love of the beauty of Greek coins led him to believe that the greatness of a nation was reflected in the coinage it produced.

With this in mind he sought out his friend and sculptor Augustus Saint-Gaudens in 1905 and asked him to design a new line of gold coins for the US. The first coin designed by Saint-Gaudens was the 1907 Gold Double Eagle. These coins remained in production until 1933 when in the midst of the Great Depression, Franklin Roosevelt took the country off the gold standard as a way to try and stabilize the shattered economy of the nation. At this point the circulation of gold coins ceased and everyone was ordered to turn in their gold coins.

Who is Augustus Saint-Gaudens?

Augustus Saint-Gaudens double eagle
Born in Ireland, Augustus Saint-Gaudens moved to New York City with his family before the age of one. From this beginning, he went on to became not only one of the greatest American sculptors of all time but also perhaps the most influential coin designer in American history. Raised in New York City, Saint-Gaudens left the United States at the age of 19 and settled in Paris to study architecture before leaving for Rome three years later. Upon returning the US, Saint-Gaudens received numerous commissions, ranging from Civil War heroes to multiple sculptures of President Abraham Lincoln. From Sculptures to Coins Though he was most well known for his sculptures, Saint-Gaudens had a deep interest in coinage and numismatics. Near the beginning of the twentieth century, many American gold coins had not been changed significantly since the middle of the 1800’s and others even kept a similar design from the end of the eighteenth century. Because of this, President Theodore Roosevelt desired a renaissance in American coinage and turned to Saint-Gaudens. The resulting coins are considered by many to be the most beautiful ever created in the United States, though that isn’t to say there weren’t some initial difficulties. Saint-Gaudens’ initial design for the $20 gold coin—now known as the Double Eagle—was so intricate that it took nearly a dozen strikes to create. The first run in 1907 was deemed too difficult for a large production and now only nineteen of these coins are in existence.
Posted in: History , Gold
Read More
Search The Blog
Categories
Recent Posts