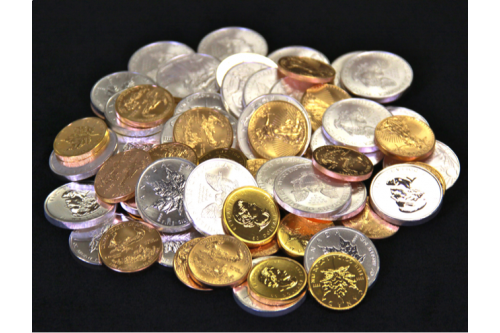 Coins of Gold & Silver Continue to be Smart Choice

When it comes to making important decisions about how one invests, it is natural to look to a source like the world's central banks to see what they do. Those notice they hold a great deal of one hard asset in particular: gold. These banks are run and staffed by people who know the value of the yellow metal as well as silver. They have years of real world experience where they are required to carefully determine asset values. They do this in order for their institution to remain stable regardless of how their respective governments may blunder when it comes to the economy. In terms of liquidity, coins made from a precious metal can still be spent decades or even centuries after they were minted, but the same is certainly not true for paper currency. This alone is a very strong signal to investors who are looking for long term financial security versus hopping from one investment to another hoping they sell off their assets before the next drop in value occurs.

Analysts across global media have been noting an interesting trend in the behavior of central banks in recent days: they are buying up gold. According to a columnist for Barron's, big changes could be heading our way in precious metals due to this changed approach to the yellow metal. Even Reuters recently reported that smaller central banks such as Kazakhstan's have started investing in gold more heavily in the effort to avoid the risks they see in holding both euros and dollars.

To further strengthen his perspective, the Barron's writer pointed out that between March 31st of 2011 and March 31st of 2012, central banks around the world bought 400 metric tons of gold. This is a fairly substantial increase in their national holdings and definitely something those investing in gold should pay attention to, analysts advise.

"For one thing," the columnist stated, "Central bankers are back buying gold. Think it's no big deal? The last time we saw the so-called official sector as such a consistent and major buyer was in 1965."

Central banks doing the buying include those in nations such as South Korea, Mexico, Russia and Columbia. Reuters reported that the bulk of those countries purchasing gold were in Asia, where emerging economies hungry for the king of the world's precious metals that they see as the most secure long term holding they can have.