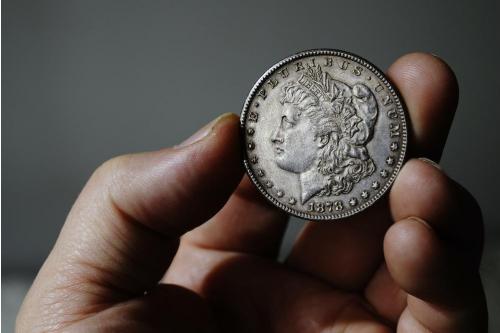 The Seated Liberty design has decorated half dimes, dimes, quarters, half dollars and even silver dollars, being a popular design favored among collectors for many years. However, when a recent report in The Inquirer, a Philadelphia newspaper, told of a coin that sold for over $1.8 million, many in the collecting world were shocked.

To learn that this is a coin without precious metals, the dime from the series, was even more shocking. One-of-a kind-coins are certainly sought after by collectors and this auction proved not to be an exception to that rule. The dime is from 1873; the auction took place in Philadelphia at the Convention Center, an event that was part of the American Numismatic Association convention.

The director of operations for Spectrum Group, Brian Kendrella, who won the Seated Liberty dime on behalf of a collector who wanted to remain anonymous, told the press, "It's not rare, it's not scarce - it's unique. And it's pretty much immaculate."

When the price of a coin at auction reaches such a height, it is not uncommon for those who are purchasing it to place their bids anonymously. Like precious metals, those who buy such rare collectible items at such high prices rarely feel like having their investments discussed in public. It is worth noting that sometimes companies and foundations make investments in coins and they have the ability to place their bids privately if the auction allows it. At over $1 million for a single dime, most auctions would allow anonymity due to obvious security concerns from the bidder.

What makes the 1873 Seated Liberty dime such a unique treasure is that it was minted in Carson City, Nevada and is one of a single day's worth of dimes minted; none of the other dimes minted that day have survived. This means that it is even scarcer than the rest of the coins minted in the small town on the U.S. frontier at that time. A coin minted in Carson City in 1873 would be somewhat rare in its own right, but when rarity reaches this level and the condition is flawless, the value skyrockets.

To be specific, the coin was the 1873-CC No Arrows Liberty Seated dime, with the No Arrows aspect of the design being one of the small changes made over the course of this overall design. It was originally part of what was known as the Battle Born Collection, which had 111 coins in all. In total, the collection sold for just short of $10 million, an impressive sum for a collection of that size.

The historical significance of the coins being sold and the condition of the dime itself both helped its bidding reach $950,000 online even before the live auction began at the convention. Phone buyers bid right along with online buyers until the bidding hit $1.6 million. The total the coin earned is due to the 15 percent buyer's fee which was required. This sale shows exactly what those who collect coins dream of. The purchase is certainly a good example of why investing in these coins can be such a smart idea.

Posted in: Selling Precious Metals
By U.S. Gold Bureau
More from this author
Did you like this post?
0
0
Search The Blog
Categories
Recent Posts