Is BRICS a Threat to the Dollar? 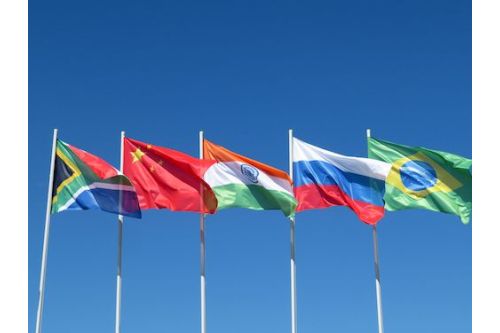 Is BRICS a Threat to the Dollar?

In 2021, the BRICS countries (Brazil, Russia, India, China, and South Africa) contributed 24.44T to the world economy, representing 24% of the total world GDP. In contrast, the G7 (U.S., Canada, England, Germany, Italy, Japan, and France) produced about 45% of the total world GDP. In 1990, BRICS produced 11% of world GDP and the G7 represented 66%. The G7 and BRICS nations represent 11 of the 12 largest world economies. South Africa’s economy is the 33rd largest economy in the world.

Except for India, all BRICS countries are significant producers of gold. South Africa is the 8th largest gold producer on earth. Canada and the U.S. are the only major gold producer in the G7 countries.

The G7 was formally the G8. The eighth country was Russia. The G8 kicked Russia out of the strategic alliance following the 2014 Russian annexation of Crimea, a Ukrainian peninsula. Despite China's massive economy, China never received an invitation to join the G7 due to accusations of human rights abuses.

The BRICS countries have increasingly taken steps to de-dollarize their economies and protect themselves from sanctions. For years, discussions about trade settlements outside the SWIFT system have been common among BRICS countries. Russian President Putin made remarks in June echoing this sentiment. Referring to BRICS, “…developing reliable alternative mechanisms for international settlements” and “…exploring the possibility of creating an international reserve currency based on the basket of BRICS currencies.

SDR (Special Drawing Rights) are a basket of currencies used for international transactions issued by the IMF (International Monetary Fund). SDRs are primarily U.S. Dollars, Euros, British pound, Japan Yen, and China's Yuan. In response to Russian sanctions, China and Russia have been accelerating efforts to create an alternative to SDRs. The BRICS are trying to build a basket of member country currencies for international transactions. If the BRICS successfully create an alternative to SDRs, there would be two world economies: BRICS and G7.

Russia has strengthened BRICS alliances by selling oil to BRICS countries at a discount outside SWIFT. In May, Chinese imports of Russian oil were up 55% from a year earlier. Russia has surpassed Saudi Arabia as the top supplier of Chinese oil. Also, Russia and China are conducting many cross-border lumber transactions in both Chinese Yuan and the Russian Ruble. A Chinese Communist Newspaper, the Global Times, editorial argued that BRICS should push for all its members to use local currencies to push back against the dollar hegemony. The article went on to say, “If they can achieve that goal, other developing nations will also join them when it comes to developing alternative financial infrastructure in response to reckless U.S. sanctions.”

Iran has applied to join BRICS. Russia is Iran's ally, and China is the primary customer of Iranian oil. Iran's significant oil deposits are probably desirable to the other BRICS nations. Argentina has also applied to BRICS. Argentina has large deposits of oil, metals, and beef production. The resources of Iran and Argentina are strategic if BRICS successfully create a commodity-based currency. After Russia pegged the Ruble to gold earlier this year, the likelihood of a BRICS commodity-backed currency significantly increased.

The BRICS economic influence extends beyond what most realize. BRICS have opened a bank called the New Development Bank (NDB) and has begun funding projects. A joint statement from BRICS finance ministers and central bank governors said, “We encourage the NDB, as a leading provider of solutions for infrastructure and sustainable development…expand local currency operation, improve its credit ratings…including undertaking more co-financing ventures.”

Saudi Arabia is actively negotiating with China to accept the Chinese Yuan for oil. The second pillar of the Saudi Arabia 2030 plan is to grow and diversify its economy. China is Saudi Arabia’s largest customer and buys almost 2 million barrels per day of Saudi oil. Before Saudi Arabia could move the oil trade away from Dollars to Yuan, it would probably happen slowly because Saudi Arabia still has significant Dollar based investments. Saudi Arabia will move away from the Dollar slowly, but it is moving away.

BRICS de-dollarizing represents one of the greatest threats to the Dollar.

All the infrastructure is being built to de-dollarize the world economy. The Chinese Communist Party's newspaper calls for pushback against the Dollar's hegemony. BRICS are actively building a currency and have already opened multiple banks. Russia has already pegged its currency to gold. Multiple signposts are warning of a bleak future for the Dollar, and indeed, there will be a divided world economy or unbelievable violence to hold the current economic structure together.

BRICS are protecting themselves from the danger of the Dollar and building their alliances with physical gold and energy. South Africa is a part of BRICS not because it is a large economy. It just has a lot of gold.